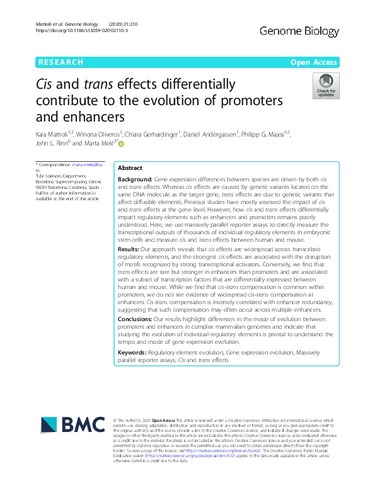 Except where otherwise noted, content on this work is licensed under a Creative Commons license : Attribution 3.0 Spain
Abstract
Background Gene expression differences between species are driven by both cis and trans effects. Whereas cis effects are caused by genetic variants located on the same DNA molecule as the target gene, trans effects are due to genetic variants that affect diffusible elements. Previous studies have mostly assessed the impact of cis and trans effects at the gene level. However, how cis and trans effects differentially impact regulatory elements such as enhancers and promoters remains poorly understood. Here, we use massively parallel reporter assays to directly measure the transcriptional outputs of thousands of individual regulatory elements in embryonic stem cells and measure cis and trans effects between human and mouse. Results Our approach reveals that cis effects are widespread across transcribed regulatory elements, and the strongest cis effects are associated with the disruption of motifs recognized by strong transcriptional activators. Conversely, we find that trans effects are rare but stronger in enhancers than promoters and are associated with a subset of transcription factors that are differentially expressed between human and mouse. While we find that cis-trans compensation is common within promoters, we do not see evidence of widespread cis-trans compensation at enhancers. Cis-trans compensation is inversely correlated with enhancer redundancy, suggesting that such compensation may often occur across multiple enhancers. Conclusions Our results highlight differences in the mode of evolution between promoters and enhancers in complex mammalian genomes and indicate that studying the evolution of individual regulatory elements is pivotal to understand the tempo and mode of gene expression evolution.
Dataset  https://www.ncbi.nlm.nih.gov/geo/
CitationMattioli, K. [et al.]. Cis and trans effects differentially contribute to the evolution of promoters and enhancers. "Genome Biology", 20 Agost 2020, vol. 21, 210.
URIhttp://hdl.handle.net/2117/328617
DOI10.1186/s13059-020-02110-3
ISSN1474-760X
Publisher versionhttps://genomebiology.biomedcentral.com/articles/10.1186/s13059-020-02110-3
Collections
Share: