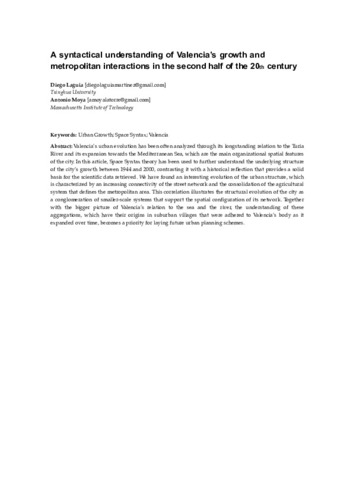 Show full item record
Laguia, Diego
Moya, Antonio
Document typeConference report
PublisherDUOT, UPC
Rights accessOpen Access
Abstract
Valencia’s urban evolution has been often analyzed through its longstanding relation to the Turia River and its expansion towards the Mediterranean Sea, which are the main organizational spatial features of the city. In this article, Space Syntax theory has been used to further understand the underlying structure of the city’s growth between 1944 and 2000, contrasting it with a historical reflection that provides a solid basis for the scientific data retrieved. We have found an interesting evolution of the urban structure, which is characterized by an increasing connectivity of the street network and the consolidation of the agricultural system that defines the metropolitan area. This correlation illustrates the structural evolution of the city as a conglomeration of smaller-scale systems that support the spatial configuration of its network. Together with the bigger picture of Valencia’s relation to the sea and the river, the understanding of these aggregations, which have their origins in suburban villages that were adhered to Valencia’s body as it expanded over time, becomes a priority for laying future urban planning schemes.
Location
1: Pl. de l'Ajuntament - Correus, 46002 Valencia, Espanya
CitationLaguia, D.; Moya, A. A syntactical understanding of Valencia's growth and metropolitan interactions in the second half of the 20th. A: Llop, C.; Cervera, M.; Peremiquel, F. (eds.). "IV Congreso ISUF-H: Metrópolis en recomposición: prospectivas proyectuales en el Siglo XXI: Forma urbis y territorios metropolitanos, Barcelona, 28-30 Septiembre 2020". Barcelona: DUOT, UPC, 2020, p. 1-12. ISBN 978-84-9880-841-4.
URIhttp://hdl.handle.net/2117/328584
ISBN978-84-9880-841-4
Collections
Share: