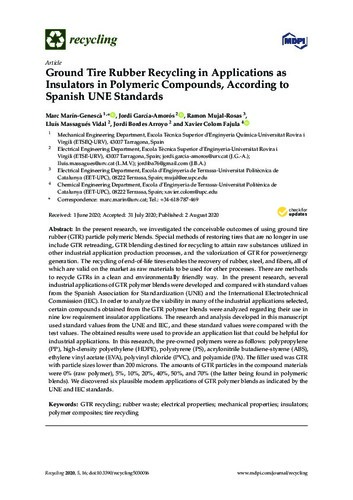 Document typeArticle
Rights accessOpen Access
Abstract
In the present research, we investigated the conceivable outcomes of using ground tire rubber (GTR) particle polymeric blends. Special methods of restoring tires that are no longer in use include GTR retreading, GTR blending destined for recycling to attain raw substances utilized in other industrial application production processes, and the valorization of GTR for power/energy generation. The recycling of end-of-life tires enables the recovery of rubber, steel, and fibers, all of which are valid on the market as raw materials to be used for other processes. There are methods to recycle GTRs in a clean and environmentally friendly way. In the present research, several industrial applications of GTR polymer blends were developed and compared with standard values from the Spanish Association for Standardization (UNE) and the International Electrotechnical Commission (IEC). In order to analyze the viability in many of the industrial applications selected, certain compounds obtained from the GTR polymer blends were analyzed regarding their use in nine low requirement insulator applications. The research and analysis developed in this manuscript used standard values from the UNE and IEC, and these standard values were compared with the test values. The obtained results were used to provide an application list that could be helpful for industrial applications. In this research, the pre-owned polymers were as follows: polypropylene (PP), high-density polyethylene (HDPE), polystyrene (PS), acrylonitrile butadiene-styrene (ABS), ethylene vinyl acetate (EVA), polyvinyl chloride (PVC), and polyamide (PA). The filler used was GTR with particle sizes lower than 200 microns. The amounts of GTR particles in the compound materials were 0% (raw polymer), 5%, 10%, 20%, 40%, 50%, and 70% (the latter being found in polymeric blends). We discovered six plausible modern applications of GTR polymer blends as indicated by the UNE and IEC standards.
CitationMarín, M. [et al.]. Ground Tire Rubber recycling in applications as insulators in polymeric compounds according to spanish UNE standards. "Recycling", 2 Agost 2020, vol. 5, núm. 3, p. 1-14.
URIhttp://hdl.handle.net/2117/328538
DOI10.3390/recycling5030016
ISSN0174-1446
Publisher versionhttps://www.mdpi.com/2313-4321/5/3/16
Collections
Share: