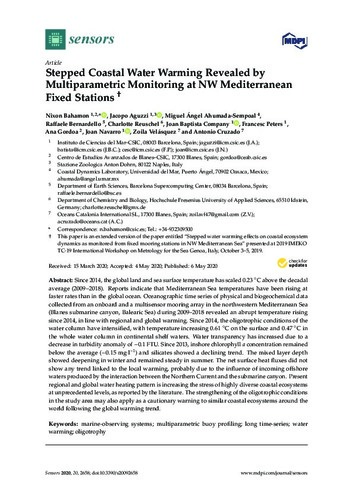 Except where otherwise noted, content on this work is licensed under a Creative Commons license : Attribution 3.0 Spain
Abstract
Since 2014, the global land and sea surface temperature has scaled 0.23 °C above the decadal average (2009–2018). Reports indicate that Mediterranean Sea temperatures have been rising at faster rates than in the global ocean. Oceanographic time series of physical and biogeochemical data collected from an onboard and a multisensor mooring array in the northwestern Mediterranean Sea (Blanes submarine canyon, Balearic Sea) during 2009–2018 revealed an abrupt temperature rising since 2014, in line with regional and global warming. Since 2014, the oligotrophic conditions of the water column have intensified, with temperature increasing 0.61 °C on the surface and 0.47 °C in the whole water column in continental shelf waters. Water transparency has increased due to a decrease in turbidity anomaly of −0.1 FTU. Since 2013, inshore chlorophyll a concentration remained below the average (−0.15 mg·l−1) and silicates showed a declining trend. The mixed layer depth showed deepening in winter and remained steady in summer. The net surface heat fluxes did not show any trend linked to the local warming, probably due to the influence of incoming offshore waters produced by the interaction between the Northern Current and the submarine canyon. Present regional and global water heating pattern is increasing the stress of highly diverse coastal ecosystems at unprecedented levels, as reported by the literature. The strengthening of the oligotrophic conditions in the study area may also apply as a cautionary warning to similar coastal ecosystems around the world following the global warming trend.
CitationBahamon, N. [et al.]. Stepped coastal water warming revealed by multiparametric monitoring at NW Mediterranean fixed stations. "Sensors", 2020, vol. 20, núm. 9, 2658.
URIhttp://hdl.handle.net/2117/328533
DOI10.3390/s20092658
ISSN1424-8220
Publisher versionhttps://www.mdpi.com/1424-8220/20/9/2658
Collections
Share: