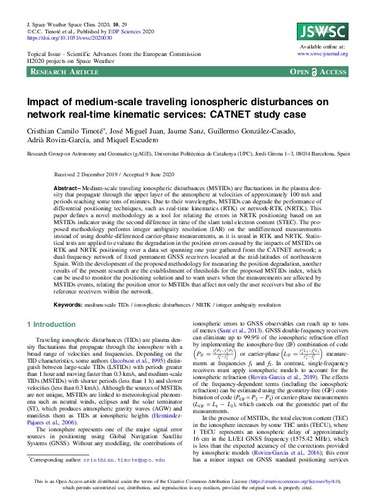 Document typeArticle
Rights accessOpen Access
Abstract
Medium-scale traveling ionospheric disturbances (MSTIDs) are fluctuations in the plasma density that propagate through the upper layer of the atmosphere at velocities of approximately 100 m/s and periods reaching some tens of minutes. Due to their wavelengths, MSTIDs can degrade the performance of differential positioning techniques, such as real-time kinematics (RTK) or network-RTK (NRTK). This paper defines a novel methodology as a tool for relating the errors in NRTK positioning based on an MSTIDs indicator using the second difference in time of the slant total electron content (STEC). The pro-posed methodology performs integer ambiguity resolution (IAR) on the undifferenced measurements instead of using double-differenced carrier-phase measurements, as it is usual in RTK and NRTK. Statistical tests are applied to evaluate the degradation in the position errors caused by the impacts of MSTIDs on RTK and NRTK positioning over a data set spanning one year gathered from the CATNET network; a dual-frequency network of fixed permanent GNSS receivers located at the mid-latitudes of northeastern Spain. With the development of the proposed methodology for measuring the position degradation, another results of the present research are the establishment of thresholds for the proposed MSTIDs index, which can be used to monitor the positioning solution and to warn users when the measurements are affected by MSTIDs events, relating the position error to MSTIDs that affect not only the user receivers but also of the reference receivers within the network.
CitationTimote, C. [et al.]. Impact of medium-scale traveling ionospheric disturbances on network real-time kinematic services: CATNET study case. "Journal of Space Weather and Space Climate", 16 Juliol 2020, vol. 19, p. 29:1-29:13.
URIhttp://hdl.handle.net/2117/328516
DOI10.1051/swsc/2020030
ISSN2115-7251
Publisher versionhttps://www.swsc-journal.org/articles/swsc/abs/2020/01/swsc190077/swsc190077.html
Collections
Share: