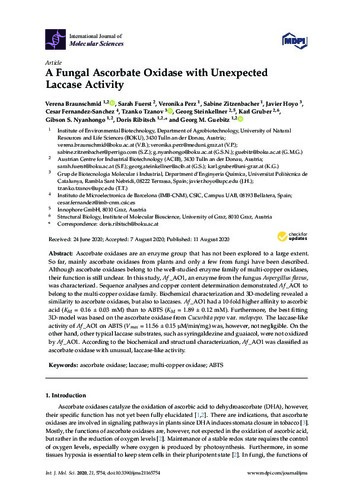 Steinkellner, Georg
Gruber, Karl
Nyanhongo, Gibson S.
Ribitsch, Doris
Guebitz, Georg
Document typeArticle
Rights accessOpen Access
Abstract
Ascorbate oxidases are an enzyme group that has not been explored to a large extent. So far, mainly ascorbate oxidases from plants and only a few from fungi have been described. Although ascorbate oxidases belong to the well-studied enzyme family of multi-copper oxidases, their function is still unclear. In this study, Af_AO1, an enzyme from the fungus Aspergillus flavus, was characterized. Sequence analyses and copper content determination demonstrated Af_AO1 to belong to the multi-copper oxidase family. Biochemical characterization and 3D-modeling revealed a similarity to ascorbate oxidases, but also to laccases. Af_AO1 had a 10-fold higher affinity to ascorbic acid (KM = 0.16 ± 0.03 mM) than to ABTS (KM = 1.89 ± 0.12 mM). Furthermore, the best fitting 3D-model was based on the ascorbate oxidase from Cucurbita pepo var. melopepo. The laccase-like activity of Af_AO1 on ABTS (Vmax = 11.56 ± 0.15 µM/min/mg) was, however, not negligible. On the other hand, other typical laccase substrates, such as syringaldezine and guaiacol, were not oxidized by Af_AO1. According to the biochemical and structural characterization, Af_AO1 was classified as ascorbate oxidase with unusual, laccase-like activity
CitationBraunschmid, V. [et al.]. A fungal ascorbate oxidase with unexpected laccase activity. "INTERNATIONAL JOURNAL OF MOLECULAR SCIENCES", 11 Agost 2020, vol. 21, núm. 16, p. 5754-1-5754-14.
URIhttp://hdl.handle.net/2117/328336
DOI10.3390/ijms21165754
ISSN1661-6596
Publisher versionhttps://www.mdpi.com/1422-0067/21/16/5754
Collections
Share: