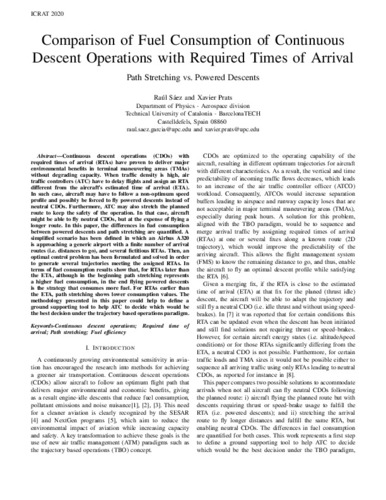 Except where otherwise noted, content on this work is licensed under a Creative Commons license : Attribution-NonCommercial-NoDerivs 3.0 Spain
Abstract
Continuous descent operations (CDOs) with required times of arrival (RTAs) have proven to deliver major environmental benefits in terminal maneuvering areas (TMAs) without degrading capacity. When traffic density is high, air traffic controllers (ATC) have to delay flights and assign an RTA different from the aircraft's estimated time of arrival (ETA). In such case, aircraft may have to follow a non-optimum speed profile and possibly be forced to fly powered descents instead of neutral CDOs. Furthermore, ATC may also stretch the planned route to keep the safety of the operation. In that case, aircraft might be able to fly neutral CDOs, but at the expense of flying a longer route. In this paper, the differences in fuel consumption between powered descents and path stretching are quantified. A simplified scenario has been defined in which an Airbus A320 is approaching a generic airport with a finite number of arrival routes (i.e. distances to go), and several fictitious RTAs. Then, an optimal control problem has been formulated and solved in order to generate several trajectories meeting the assigned RTAs. In terms of fuel consumption results show that, for RTAs later than the ETA, although in the beginning path stretching represents a higher fuel consumption, in the end flying powered descents is the strategy that consumes more fuel. For RTAs earlier than the ETA, path stretching shows lower consumption values. The methodology presented in this paper could help to define a ground supporting tool to help ATC to decide which would be the best decision under the trajectory based operations paradigm.
CitationSaez, R.; Prats, X. Comparison of fuel consumption of Continuous Descent Operations with required times of arrival. A: International Conference on Research in Air Transportation. "ICRAT 2020: papers & presentations". 2020, p. 1-8.
URIhttp://hdl.handle.net/2117/328335
Collections
Share: