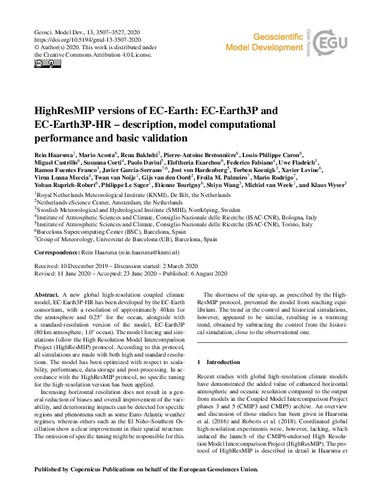 Except where otherwise noted, content on this work is licensed under a Creative Commons license : Attribution 3.0 Spain
ProjectPRIMAVERA - PRocess-based climate sIMulation: AdVances in high resolution modelling and European climate Risk Assessment (EC-H2020-641727)
SPFireSD - Seasonal Prediction of Fire danger using Statistical and Dynamical models (EC-H2020-748750)
INADEC - Impacts of the North Atlantic Decadal variability on European Climate: mechanisms and predictability (EC-H2020-800154)
STARS - SupercompuTing And Related applicationS Fellows Program (EC-H2020-754433)
Abstract
A new global high-resolution coupled climate model, EC-Earth3P-HR has been developed by the EC-Earth consortium, with a resolution of approximately 40 km for the atmosphere and 0.25∘ for the ocean, alongside with a standard-resolution version of the model, EC-Earth3P (80 km atmosphere, 1.0∘ ocean). The model forcing and simulations follow the High Resolution Model Intercomparison Project (HighResMIP) protocol. According to this protocol, all simulations are made with both high and standard resolutions. The model has been optimized with respect to scalability, performance, data storage and post-processing. In accordance with the HighResMIP protocol, no specific tuning for the high-resolution version has been applied. Increasing horizontal resolution does not result in a general reduction of biases and overall improvement of the variability, and deteriorating impacts can be detected for specific regions and phenomena such as some Euro-Atlantic weather regimes, whereas others such as the El Niño–Southern Oscillation show a clear improvement in their spatial structure. The omission of specific tuning might be responsible for this. The shortness of the spin-up, as prescribed by the HighResMIP protocol, prevented the model from reaching equilibrium. The trend in the control and historical simulations, however, appeared to be similar, resulting in a warming trend, obtained by subtracting the control from the historical simulation, close to the observational one.
Dataset  https://doi.org/10.22033/ESGF/CMIP6.2322