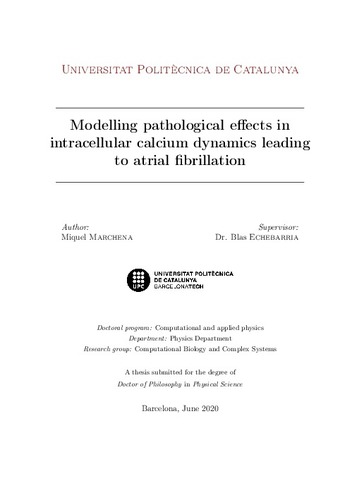 Except where otherwise noted, content on this work is licensed under a Creative Commons license : Attribution 4.0 International
Abstract
The heart beating is produced by the synchronization of the cardiac cells' contraction. A dysregulation in this mechanism may produce episodes of abnormal heart contraction. The origin of these abnormalities often lies at the subcellular level where calcium is the most important ion that controls the cell contraction. The regulation of calcium concentration is determined by the ryanodine receptors (RyR), the calcium channels that connect the cytosol and the sarcoplasmic reticulum. RyRs open and close stochastically with calcium-dependent rates. The fundamental calcium release event is known as calcium spark, which refers to a local release of calcium through one or more RyRs. Thus, a deep knowledge on both the spatio-temporal characteristics of the calcium patterns and the role of the RyRs is crucial to understand the transition between healthy to unhealthy cells. The aim of this Thesis has been to figure out these changes at the submicron scale, which may induce the transition to Atrial Fibrillation (AF) in advanced stages. To address this issue, I have developed, and validated, a subcellular mathematical model of an atrial myocyte which includes the electro-physiological currents as well as the fundamental intracellular structures. The high resolution of the model has allowed me to study the spatio-temporal calcium features that arise from both the cell stimulation and the resting conditions. Simulations show the relevance of the assembly of RyRs into clusters, leading to the formation of macro-sparks for heterogeneous distributions. These macro-sparks may produce ectopic beats under pathophysiological conditions. The incorporation of RyR-modulators into the model produces a nonuniform spatial distribution of calcium sparks, a situation observed during AF. In this sense, calsequestrin (CSQ) has emerged as a key calcium buffer that modifies the calcium handling. The lack of CSQ produces an increase in the spark frequency and, during calcium overload, it also promotes the appearance of global calcium oscillations. Finally, I have also characterized the effect of detubulation, a common issue in cells with AF and heart failure. Thus, the present work represents a step forward in the understanding of the mechanisms leading to AF, with the development of computational models that, in the future, can be used to complement in vitro or in vivo studies, helping find therapeutic targets for this disease.
CitationMarchena Angos, M. Modelling pathological effects in intracellular calcium dynamics leading to atrial fibrillation. Tesi doctoral, UPC, Departament de Física, 2020. Available at: <http://hdl.handle.net/2117/328185>
URIhttp://hdl.handle.net/2117/328185
Collections
Share: