Warmer temperatures and their effect on East-African malaria 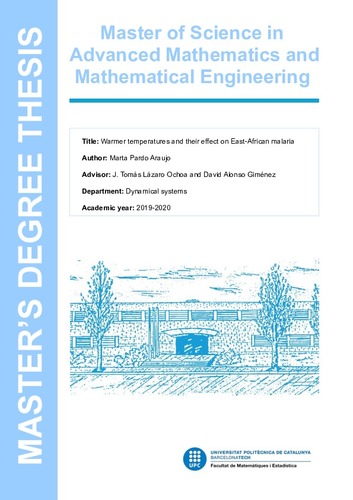 ; Alonso Giménez, David
Document typeMaster thesis
Rights accessOpen Access
Abstract
Malaria has been an issue worldwide for a long time, having a huge social, economic, and health burden. This disease occurs mostly in tropical and subtropical areas of the world, in countries where the levels of poverty are higher. In this work we will focus our study of malaria in Kenya. Because it has been an issue in this region for a long time. Due to insecticide and cool temperatures the disease was eradicated from Kenya s highlands in the 1960 s. However, the disease has returned in recent years, as some researchers believe that it is produced by subtle changes in the region s climate. We have strongly based our work in the paper done by David Alonso, Menno and Mercedes Pascual called "Epidemic malaria and warmer temperatures in recent decades in an East African highland." . But, while they focus their study on the influence of climate change in the spread of malaria, we give a more qualitative approach of the model and present some feasible applications to other geographical regions. Moreover we introduce different rates to analyse the impact of a pandemic, like the basic reproduction rate R0.
SubjectsDifferentiable dynamical systems, Sistemes dinàmics diferenciables, Teoria ergòdica
URIhttp://hdl.handle.net/2117/328167
Collections
Share: