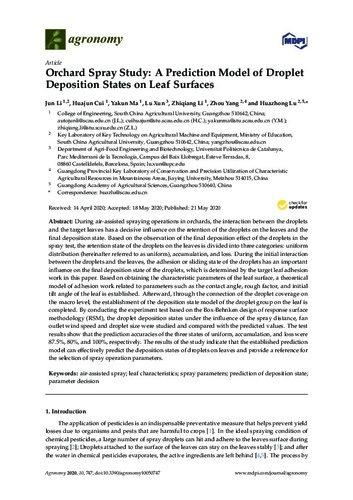 Document typeArticle
PublisherMultidisciplinary Digital Publishing Institute (MDPI)
Rights accessOpen Access
Abstract
During air-assisted spraying operations in orchards, the interaction between the droplets and the target leaves has a decisive influence on the retention of the droplets on the leaves and the final deposition state. Based on the observation of the final deposition effect of the droplets in the spray test, the retention state of the droplets on the leaves is divided into three categories: uniform distribution (hereinafter referred to as uniform), accumulation, and loss. During the initial interaction between the droplets and the leaves, the adhesion or sliding state of the droplets has an important influence on the final deposition state of the droplets, which is determined by the target leaf adhesion work in this paper. Based on obtaining the characteristic parameters of the leaf surface, a theoretical model of adhesion work related to parameters such as the contact angle, rough factor, and initial ilt angle of the leaf is established. Afterward, through the connection of the droplet coverage on the macro level, the establishment of the deposition state model of the droplet group on the leaf is completed. By conducting the experiment test based on the Box-Behnken design of response surface methodology (RSM), the droplet deposition states under the influence of the spray distance, fan outlet wind speed and droplet size were studied and compared with the predicted values. The test results show that the prediction accuracies of the three states of uniform, accumulation, and loss were 87.5%, 80%, and 100%, respectively. The results of the study indicate that the established prediction model can effectively predict the deposition states of droplets on leaves and provide a reference for the selection of spray operation parameters.
CitationLi, J. [et al.]. Orchard spray study: a prediction model of droplet deposition states on leaf surfaces. "Agronomy", 1 Maig 2020, vol. 10, p. 1-21.
URIhttp://hdl.handle.net/2117/328117
DOI10.3390/agronomy10050747
ISSN2073-4395
Publisher versionhttps://www.mdpi.com/2073-4395/10/5/747
Collections
Share: