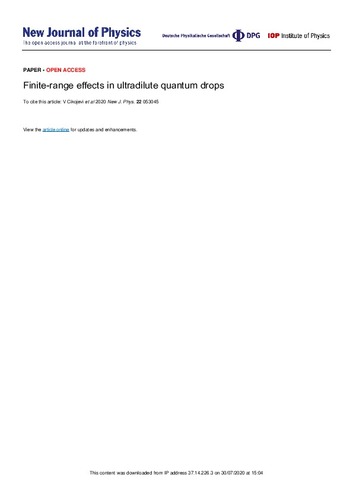 Document typeArticle
Rights accessOpen Access
Abstract
In the first experimental realization of dilute Bose–Bose liquid drops using two hyperfine states of 39K some discrepancies between theory and experiment were observed. The standard analysis of the data using the Lee–Huang–Yang beyond mean-field theory predicted critical numbers which were significantly off the experimental measurements. Also, the radial size of the drops in the experiment proved to be larger than expected from this theory. Using a new functional, which is based on quantum Monte Carlo results of the bulk phase incorporating finite-range effects, we can explain the origin of the discrepancies in the critical number. This result proves the necessity of including finite-range corrections to deal with the observed properties in this setup. The controversy on the radial size is reasoned in terms of the departure from the optimal concentration ratio between the two species of the mixture.
CitationCikojevic, V.; Leandra, V.; Boronat, J. Finite-range effects in ultradilute quantum drops. "New journal of physics", 27 Maig 2020, vol. 22, núm. 53045, p. 1-10.
URIhttp://hdl.handle.net/2117/328095
DOI10.1088/1367-2630/ab867a
ISSN1367-2630
Publisher versionhttps://iopscience.iop.org/article/10.1088/1367-2630/ab867a
Collections
Share: