Analysis of the fire propagation in a sublevel coal mine 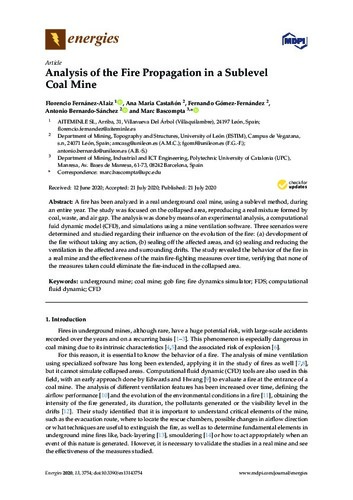 Document typeArticle
Rights accessOpen Access
Abstract
A fire has been analyzed in a real underground coal mine, using a sublevel method, duringan entire year. The study was focused on the collapsed area, reproducing a real mixture formed bycoal, waste, and air gap. The analysis was done by means of an experimental analysis, a computationalfuid dynamic model (CFD), and simulations using a mine ventilation software. Three scenarios weredetermined and studied regarding their influence on the evolution of the fire: (a) development ofthe fire without taking any action, (b) sealing offthe affected areas, and (c) sealing and reducing theventilation in the affected area and surrounding drifts. The study revealed the behavior of the fire ina real mine and the effectiveness of the main fire-fighting measures over time, verifying that none ofthe measures taken could eliminate the fire-induced in the collapsed area.
Location
1: Plaza de España, 1, 33909 Langreo, Asturias, Espanya
CitationFernández-Alaiz, F. [et al.]. Analysis of the fire propagation in a sublevel coal mine. "Energies", 21 Juliol 2020, vol. 13, núm. 14, p. 3754: 1-3754: 14.
URIhttp://hdl.handle.net/2117/328058
DOI10.3390/en13143754
ISSN1996-1073
Publisher versionhttps://www.mdpi.com/1996-1073/13/14/3754
Collections
Share: