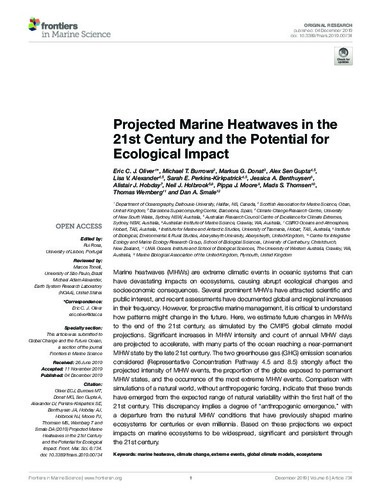 Gupta, Alex Sen
Alexander, Lisa V.
Perkins-Kirkpatrick, Sarah E.
Benthuysen, Jessica A.
Hobday, Alistair J.
Holbrook, Neil J.
Moore, Pippa J.
Thomsen, Mads S.
Wernberg, Thomas
Smale, Dan A.
Document typeArticle
PublisherFrontiers
Rights accessOpen Access
Abstract
Marine heatwaves (MHWs) are extreme climatic events in oceanic systems that can have devastating impacts on ecosystems, causing abrupt ecological changes and socioeconomic consequences. Several prominent MHWs have attracted scientific and public interest, and recent assessments have documented global and regional increases in their frequency. However, for proactive marine management, it is critical to understand how patterns might change in the future. Here, we estimate future changes in MHWs to the end of the 21st century, as simulated by the CMIP5 global climate model projections. Significant increases in MHW intensity and count of annual MHW days are projected to accelerate, with many parts of the ocean reaching a near-permanent MHW state by the late 21st century. The two greenhouse gas (GHG) emission scenarios considered (Representative Concentration Pathway 4.5 and 8.5) strongly affect the projected intensity of MHW events, the proportion of the globe exposed to permanent MHW states, and the occurrence of the most extreme MHW events. Comparison with simulations of a natural world, without anthropogenic forcing, indicate that these trends have emerged from the expected range of natural variability within the first half of the 21st century. This discrepancy implies a degree of “anthropogenic emergence,” with a departure from the natural MHW conditions that have previously shaped marine ecosystems for centuries or even millennia. Based on these projections we expect impacts on marine ecosystems to be widespread, significant and persistent through the 21st century.
Related documenthttps://www.frontiersin.org/articles/10.3389/fmars.2019.00734/full#supplementary-material
CitationOliver, E.C.J. [et al.]. Projected marine heatwaves in the 21st century and the potential for ecological impact. "Frontiers in Marine Science", 2019, vol. 6, 734.
URIhttp://hdl.handle.net/2117/328009
DOI10.3389/fmars.2019.00734
ISSN2296-7745
Publisher versionhttps://www.frontiersin.org/articles/10.3389/fmars.2019.00734/full
Collections
Share: