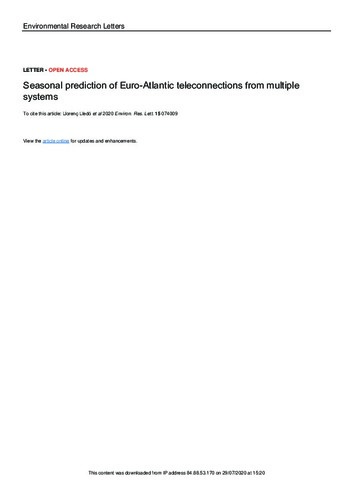 Samsó, Margarida
Document typeArticle
PublisherIOP Publishing
Rights accessOpen Access
European Commission's projectS2S4E - Sub-seasonal to Seasonal climate forecasting for Energy (EC-H2020-776787)
Abstract
Seasonal mean atmospheric circulation in Europe can vary substantially from year to year. This diversity of conditions impacts many socioeconomic sectors. Teleconnection indices can be used to characterize this seasonal variability, while seasonal forecasts of those indices offer the opportunity to take adaptation actions a few months in advance. For instance, the North Atlantic Oscillation has proven useful as a proxy for atmospheric effects in several sectors, and dynamical forecasts of its evolution in winter have been shown skillful. However the NAO only characterizes part of this seasonal circulation anomalies, and other teleconnections such as the East Atlantic, the East Atlantic Western Russia or the Scandinavian Pattern also play an important role in shaping atmospheric conditions in the continent throughout the year. This paper explores the quality of seasonal forecasts of these four teleconnection indices for the four seasons of the year, derived from five different seasonal prediction systems. We find that several teleconnection indices can be skillfully predicted in advance in winter, spring and summer. We also show that there is no single prediction system that performs better than the others for all seasons and teleconnections, and that a multi-system approach produces results that are as good as the best of the systems.
CitationLledó, L. [et al.]. Seasonal prediction of Euro-Atlantic teleconnections from multiple systems. "Environmental Research Letters", 2020, vol. 15, núm. 7, 074009.
URIhttp://hdl.handle.net/2117/327996
DOI10.1088/1748-9326/ab87d2
ISSN1748-9326
Publisher versionhttps://iopscience.iop.org/article/10.1088/1748-9326/ab87d2
Collections
Share: