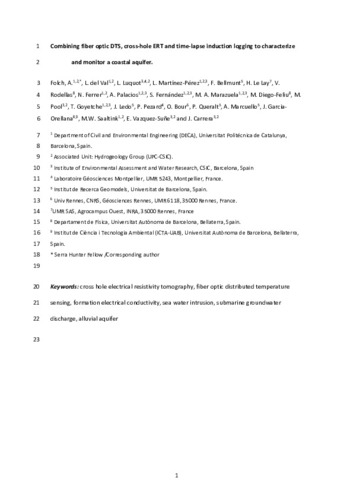 Except where otherwise noted, content on this work is licensed under a Creative Commons license : Attribution-NonCommercial-NoDerivs 4.0 International
ProjectMEZCLA Y DISPERSION EN EL TRANSPORTE DE ENERGIA Y SOLUTOS (MINECO-CGL2013-48869-C2-2-R)
Abstract
The characterization of saline water intrusion (SWI) and its hydrodynamics is a key issue to understand submarine groundwater discharge (SGD) and manage groundwater resources in coastal areas. To test and compare different methods of characterization and monitoring, a new experimental site has been constructed in a coastal alluvial aquifer north of Barcelona city (Catalonia, Spain). The site is located between 30 and 90 m from the seashore and comprises 16 shallow piezometers organized in nests of three with depths ranging between 15 and 25 m and 4 solitary piezometers. The objective of this paper is to combine different recently developed monitoring techniques to evaluate temporal variations in the aquifer hydrodynamics of the site at different spatial scales before and after the dry season of 2015. At the site scale, fibre optic distributed temperature sensing (FO-DTS), for the first time applied to study SWI, and cross-hole electrical resistivity tomography (CHERT) has been applied. At the meter/borehole scale, electrical conductivity of the formation has been applied not only in a repeated manner (“time lapse”), but also for the first time at relatively high frequency (1 sample every 10 min). CHERT has provided a better characterization of the seawater intrusion than electrical conductivity data obtained from piezometers. The combination of techniques has allowed improving the understanding of the system by: 1) characterizing the extent and shape of SWI; 2) differentiating two different dynamics in the aquifer; and 3) identifying preferential flow paths over different time and spatial intervals. Future challenges and the application of these techniques in other areas are also discussed.
CitationFolch, A. [et al.]. Combining fiber optic DTS, cross-hole ERT and time-lapse induction logging to characterize and monitor a coastal aquifer. "Journal of hydrology", Setembre 2020, vol. 588, p. 125050:1-125050:12.
URIhttp://hdl.handle.net/2117/327987
DOI10.1016/j.jhydrol.2020.125050
ISSN0022-1694
Publisher versionhttps://www.sciencedirect.com/science/article/pii/S0022169420305102
Collections
Share: