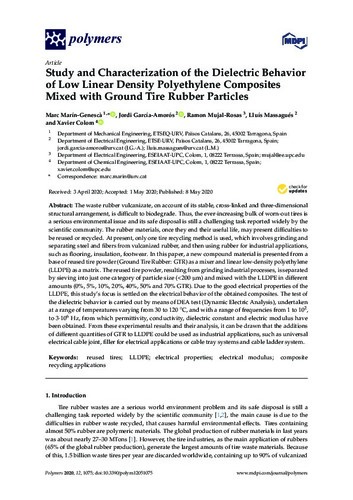 Document typeArticle
PublisherMultidisciplinary Digital Publishing Institute (MDPI)
Rights accessOpen Access
Abstract
The waste rubber vulcanizate, on account of its stable, cross-linked and three-dimensional structural arrangement, is difficult to biodegrade. Thus, the ever-increasing bulk of worn-out tires is a serious environmental issue and its safe disposal is still a challenging task reported widely by the scientific community. The rubber materials, once they end their useful life, may present difficulties to be reused or recycled. At present, only one tire recycling method is used, which involves grinding and separating steel and fibers from vulcanized rubber, and then using rubber for industrial applications, such as flooring, insulation, footwear. In this paper, a new compound material is presented from a base of reused tire powder (Ground Tire Rubber: GTR) as a mixer and linear low-density polyethylene (LLDPE) as a matrix. The reused tire powder, resulting from grinding industrial processes, is separated by sieving into just one category of particle size (<200 µm) and mixed with the LLDPE in different amounts (0%, 5%, 10%, 20%, 40%, 50% and 70% GTR). Due to the good electrical properties of the LLDPE, this study’s focus is settled on the electrical behavior of the obtained composites. The test of the dielectric behavior is carried out by means of DEA test (Dynamic Electric Analysis), undertaken at a range of temperatures varying from 30 to 120 °C, and with a range of frequencies from 1 to 102, to 3·106 Hz, from which permittivity, conductivity, dielectric constant and electric modulus have been obtained. From these experimental results and their analysis, it can be drawn that the additions of different quantities of GTR to LLDPE could be used as industrial applications, such as universal electrical cable joint, filler for electrical applications or cable tray systems and cable ladder system.
CitationMarín, M. [et al.]. Study and characterization of the dielectric behavior of low linear density polyethylene composites mixed with ground tire rubber particles. "Polymers", 1 Maig 2020, vol. 12, núm. 5, p. 1-19.
URIhttp://hdl.handle.net/2117/327859
DOI10.3390/POLYM12051075
ISSN2073-4360
Publisher versionhttps://www.mdpi.com/2073-4360/12/5/1075
Collections
Share: