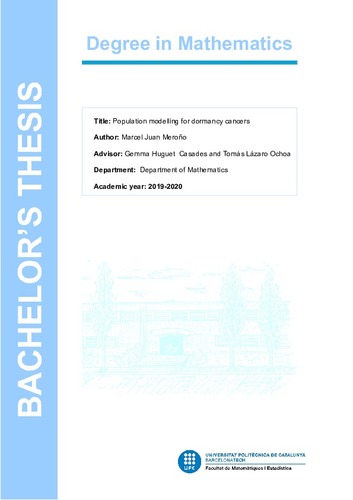 Document typeBachelor thesis
Rights accessOpen Access
Abstract
Immunotherapy is a type of cancer treatment that boosts the natural defenses of the body to fight cancer without damaging normal cells. Many scientists have shown interest in developing a mathematical model that simulates the evolution of the populations of both immune and cancer cells under the effects of this treatment. In this project, we work with a couple of models of cancer dormancy proposed by Kathleen P. Wilkie and Philip Hanhnfeldt in their article "\emph{Mathematical models of immune-induced cancer dormancy and the emergence of immune evasion}". Using dynamical systems theory, we study the dynamics of a 3-dimensional system of differential equations that considers two different subpopulations of cancer cells: being one of them more resistant than the other against immune predation. We show that, if the predation strength of the immune cells against the cancer cells is constant, they will prevent the cancer population from escaping dormant state and only the more resistant subpopulation will survive. Moreover, using numerical integration, we study different modifications of a simple non-autonomous model assuming that the predation strength decays due to an immunoediting process. These modifications include some variations of a periodic treatment combined with immunotherapy. After comparing the results obtained from the modified models, we observe that all the solutions have similar values for both immune and cancer populations and that the different populations behave similarly in a three year interval. We conclude that these models may be too simple to represent accurately the evolution of an immune-induced cancer.
SubjectsDynamical systems, Ergodic theory, Sistemes dinàmics diferenciables, Teoria ergòdica
URIhttp://hdl.handle.net/2117/327724
Collections
Share: