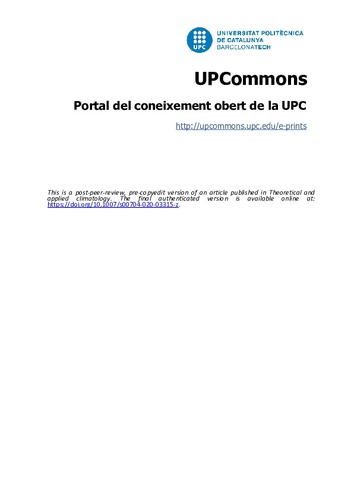 Burgueño Rivero, August
Document typeArticle
Rights accessOpen Access
All rights reserved. This work is protected by the corresponding intellectual and industrial property rights. Without prejudice to any existing legal exemptions, reproduction, distribution, public communication or transformation of this work are prohibited without permission of the copyright holder
Abstract
Standardized heavy rainfall profiles may contribute to a best knowledge concerning flash floods, ground erosion and runoff. Taking advantage of the rain rate gauges network of Barcelona city and applying a short integration time of 5 min, the heavy rainfall records with amounts above 25 mm and longer than 60 min have been selected along 15 years, being detected 499 records corresponding to 67 episodes. The amount distribution of these records are analysed at time deciles. By grouping these standardized rainfall profiles according to their similarity by means of the average linkage clustering algorithm, 10 clusters are derived, each one of them characterized by different time evolution of rainfall. The representative standardized rainfall profiles for every one of the clusters, together with maximum 5-min rain amounts and rainfall amounts characterizing them, permit to distinguish rainfall patterns. In addition, the extreme heavy rainfalls which may lead to flash floods are identified, as also their respective synoptic situations. In short, this analysis offers a description of heavy rainfall patterns in Barcelona city, complementing previous papers on the normalized intensity curves and 5-min intensity return periods. These heavy rainfall analyses would be very useful when designing drainage and sewerage systems in urban areas as Barcelona, where flash floods may be expected due to episodes of notable rainfall amount and intensity. The imperviousness density of the soil and an appropriate sewerage structure should be adapted to mitigate the effects of these copious and intense episodes.
CitationLana, F.J. [et al.]. Characterization of standardised heavy rainfall profiles for Barcelona city: clustering, rain amounts and intensity peaks. "Theoretical and applied climatology", 9 Juliol 2020, p. 1-14.
URIhttp://hdl.handle.net/2117/327713
DOI10.1007/s00704-020-03315-z
ISSN0177-798X
Publisher versionhttps://link.springer.com/article/10.1007%2Fs00704-020-03315-z
Collections
Share: