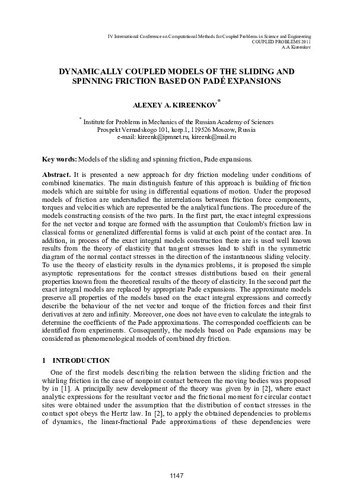 Show full item record
Kireenkov, Alexey A.
Document typeConference report
PublisherCIMNE
Rights accessOpen Access
Abstract
It is presented a new approach for dry friction modeling under conditions of combined kinematics. The main distinguish feature of this approach is building of friction models which are suitable for using in differential equations of motion. Under the proposed models of friction are understudied the interrelations between friction force components, torques and velocities which are represented be the analytical functions. The procedure of the models constructing consists of the two parts. In the first part, the exact integral expressions for the net vector and torque are formed with the assumption that Coulomb's friction law in classical forms or generalized differential forms is valid at each point of the contact area. In addition, in process of the exact integral models construction there are is used well known results from the theory of elasticity that tangent stresses lead to shift in the symmetric diagram of the normal contact stresses in the direction of the instantaneous sliding velocity. To use the theory of elasticity results in the dynamics problems, it is proposed the simple asymptotic representations for the contact stresses distributions based on their general properties known from the theoretical results of the theory of elasticity. In the second part the exact integral models are replaced by appropriate Pade expansions. The approximate models preserve all properties of the models based on the exact integral expressions and correctly describe the behaviour of the net vector and torque of the friction forces and their first derivatives at zero and infinity. Moreover, one does not have even to calculate the integrals to determine the coefficients of the Pade approximations. The corresponded coefficients can be identified from experiments. Consequently, the models based on Pade expansions may be considered as phenomenological models of combined dry friction.
CitationKireenkov, A.A. Dynamically coupled models of the sliding and spinning friction based on padé expansions. A: COUPLED IV. "COUPLED IV : proceedings of the IV International Conference on Computational Methods for Coupled Problems in Science and Engineering". CIMNE, 2011, p. 1147-1154. ISBN 978-84-89925-78-6.
URIhttp://hdl.handle.net/2117/327590
ISBN978-84-89925-78-6
Collections
Share: