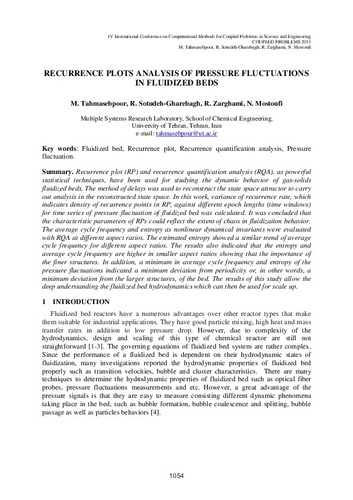 Show full item record
Tahmasebpoor, M.
Sotudeh-Gharebagh, R.
Zarghami, R.
Mostoufi, N.
Document typeConference report
PublisherCIMNE
Rights accessOpen Access
All rights reserved. This work is protected by the corresponding intellectual and industrial property rights. Without prejudice to any existing legal exemptions, reproduction, distribution, public communication or transformation of this work are prohibited without permission of the copyright holder
Abstract
Recurrence plot (RP) and recurrence quantification analysis (RQA), as powerful statistical techniques, have been used for studying the dynamic behavior of gas-solids fluidized beds. The method of delays was used to reconstruct the state space attractor to carry out analysis in the reconstructed state space. In this work, variance of recurrence rate, which indicates density of recurrence points in RP, against different epoch lengths (time windows) for time series of pressure fluctuation of fluidized bed was calculated. It was concluded that the characteristic parameters of RPs could reflect the extent of chaos in fluidization behavior. The average cycle frequency and entropy as nonlinear dynamical invariants were evaluated with RQA at different aspect ratios. The estimated entropy showed a similar trend of average cycle frequency for different aspect ratios. The results also indicated that the entropy and average cycle frequency are higher in smaller aspect ratios showing that the importance of the finer structures. In addition, a minimum in average cycle frequency and entropy of the pressure fluctuations indicated a minimum deviation from periodicity or, in other words, a minimum deviation from the larger structures, of the bed. The results of this study allow the deep understanding the fluidized bed hydrodynamics which can then be used for scale up.
CitationTahmasebpoor, M. [et al.]. Recurrence plots analysis of pressure fluctuations in fluidized beds. A: COUPLED IV. "COUPLED IV : proceedings of the IV International Conference on Computational Methods for Coupled Problems in Science and Engineering". CIMNE, 2011, p. 1054-1061. ISBN 978-84-89925-78-6.
URIhttp://hdl.handle.net/2117/327581
ISBN978-84-89925-78-6
Collections
Share: