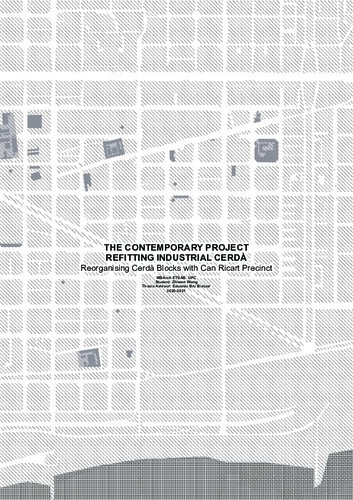 Except where otherwise noted, content on this work is licensed under a Creative Commons license : Attribution-NonCommercial-NoDerivs 3.0 Spain
Abstract
The layout of Poblenou is complicated, combined with many layers, including the Cerdà Grid and practices following it, different kinds of industrial heritage and its layout, etc. They are different and contradictory, for carried out in different historical periods and from architectural thoughts. As Cerdà grid gradually approaching, many of industrial heritage sunk and scattered into the orthogonal grid. The old layout has been dissolved into new context. However, they brought ´diversity´ to Cerdà grid, which is the crucial value in the evolution of Cerdà in Poblenou. It naturally generates chances for evolution of new Cerdà to accommodate and integrate various and contradictory elements here, and can be identified as ´Industrial Cerdà´. Thus, ´Industrial Cerdà´ in Poblenou should not be simply described as ´orthogonal grid´, but the carrier of diversity and ´non-Cerdà´ layers in Poblenou as well. Thus, thesis mainly focuses on three basic question: How to insert industrial heritage into Cerdà block? How can industrial heritage refit the form of Cerdà? And how to integrate them together? The thesis will be divided into 3 aspects. Firstly, standard Cerdà, as well as many orthogonal planning in history, emphasizes the concept of ´unit´ and their solutions of generating public spaces. It shows a critical idea of individual but common cluster for safety and sense of belonging, while assembled for urban spaces. Thus, they are not enclosed, with some connections to context. Among some new Cerdà blocks in Poblenou, courtyards are reorganised as urban space in larger scale. Secondly, Cerdà plan can never be perfect standard model. Exceptional plots of it create horizontal diversity to various circumstances for Cerdà practices. It emerged from compromises when facing with reality, including function, entrance, landmark, etc. In order to establish positive interactions between courtyard and context with visual, functional and mobility connections in different types in different parts of a standard model. Thirdly, industrial heritages and its layout are supposed to contribute to reform of Cerdà blocks to improve the quality of pedestrian level spaces of Poblenou, which can be achieved by overlapping. Many architects expressed their ideas of integration different layers of activities and context, which could help to create vertical diversity for Cerdà forms. Meanwhile, heritages can also be well absorbed in pedestrian spaces for city life. To take Can Ricart as example, this thesis aims to practise formal strategies for industrial heritage to refit in Cerdà block in Poblenou, and also help them to assimilate into new communities there.
SubjectsCity planning -- Spain -- Barcelona, Can Ricart (Factory : Barcelona, Spain), Industrial buildings -- Spain -- Barcelona, Industrial archaeology -- Spain -- Barcelona, Urbanisme -- Catalunya -- Barcelona, Can Ricart (Barcelona, Catalunya), Poblenou (Barcelona, Catalunya), Edificis industrials -- Catalunya -- Barcelona, Arqueologia industrial -- Catalunya -- Barcelona
DegreeMÀSTER UNIVERSITARI EN ESTUDIS AVANÇATS EN ARQUITECTURA-BARCELONA (Pla 2015)
Location
1: Carrer Emilia Coranty, 6, 08018 Barcelona, Espanya
URIhttp://hdl.handle.net/2117/327575
Collections
Share: