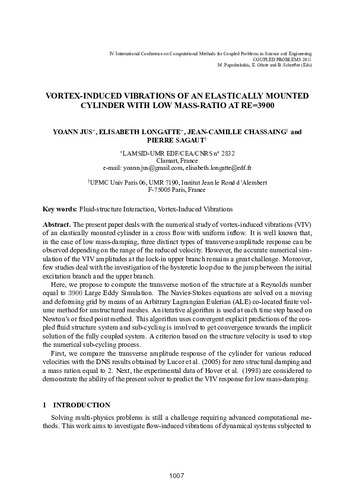 Show full item record
Jus, Yoann
Longatte, Elisabeth
Chassaing, Jean-Camille
Sagaut, Pierre
Document typeConference report
PublisherCIMNE
Rights accessOpen Access
Abstract
The present paper deals with the numerical study of vortex-induced vibrations (VIV) of an elastically mounted cylinder in a cross flow with uniform inflow. It is well known that, in the case of low mass-damping, three distinct types of transverse amplitude response can be observed depending on the range of the reduced velocity. However, the accurate numerical simulation of the VIV amplitudes at the lock-in upper branch remains a great challenge. Moreover, few studies deal with the investigation of the hysteretic loop due to the jump between the initial excitation branch and the upper branch. Here, we propose to compute the transverse motion of the structure at a Reynolds number equal to 3900 Large Eddy Simulation. The Navier-Stokes equations are solved on a moving and deforming grid by means of an Arbitrary Lagrangian Eulerian (ALE) co-located finite volume method for unstructured meshes. An iterative algorithm is used at each time step based on Newton’s or fixed point method. This algorithm uses convergent explicit predictions of the coupled fluid structure system and sub-cycling is involved to get convergence towards the implicit solution of the fully coupled system. A criterion based on the structure velocity is used to stop the numerical sub-cycling process. First, we compare the transverse amplitude response of the cylinder for various reduced velocities with the DNS results obtained by Lucor et al. (2005) for zero structural damping and a mass ration equal to 2. Next, the experimental data of Hover et al. (1998) are considered to demonstrate the ability of the present solver to predict the VIV response for lowmass-damping.
CitationJus, Y. [et al.]. Vortex-induced vibrations of an elasticallymounted cylinderwith lowmass-ratio at RE=3900. A: COUPLED IV. "COUPLED IV : proceedings of the IV International Conference on Computational Methods for Coupled Problems in Science and Engineering". CIMNE, 2011, p. 1007-1032. ISBN 978-84-89925-78-6.
URIhttp://hdl.handle.net/2117/327536
ISBN978-84-89925-78-6
Collections
Share: