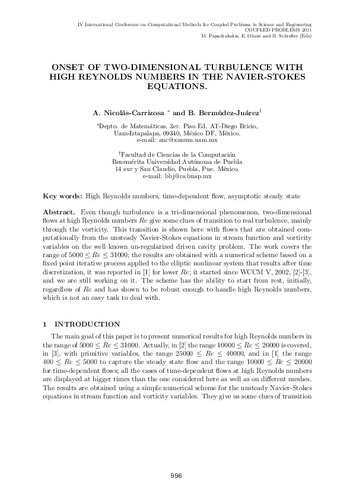 Show full item record
Nicolás-Carrizosa, A.
Bermúdez-Juárez, B.
Document typeConference report
PublisherCIMNE
Rights accessOpen Access
All rights reserved. This work is protected by the corresponding intellectual and industrial property rights. Without prejudice to any existing legal exemptions, reproduction, distribution, public communication or transformation of this work are prohibited without permission of the copyright holder
Abstract
Even though turbulence is a tri-dimensional phenomenon, two-dimensional flows at high Reynolds numbers Re give some clues of transition to real turbulence, mainly through the vorticity. This transition is shown here with flows that are obtained computationally from the unsteady Navier-Stokes equations in stream function and vorticity variables on the well known un-regularized driven cavity problem. The work covers the range of 5000 ≤ Re ≤ 31000; the results are obtained with a numerical scheme based on a fixed point iterative process applied to the elliptic nonlinear system that results after time discretization, it was reported in [1] for lower Re; it started since WCCM V, 2002, [2]-[3], and we are still working on it. The scheme has the ability to start from rest, initially, regardless of Re and has shown to be robust enough to handle high Reynolds numbers, which is not an easy task to deal with.
CitationNicolás-Carrizosa, A.; Bermúdez-Juárez, B. Onset of two-dimensional turbulence with high reynolds numbers in the navier-stokes equations. A: COUPLED IV. "COUPLED IV : proceedings of the IV International Conference on Computational Methods for Coupled Problems in Science and Engineering". CIMNE, 2011, p. 996-1006. ISBN 978-84-89925-78-6.
URIhttp://hdl.handle.net/2117/327535
ISBN978-84-89925-78-6
Collections
Share: