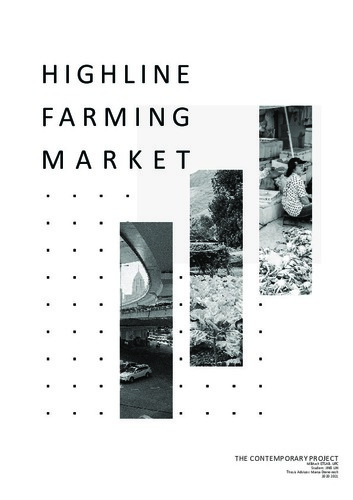 Document typeMaster thesis
Rights accessOpen Access
Abstract
Traditional markets used to situated in the community center and metropolitan transportation hubs, which facility residents’ daily food purchasing and food transport from the countryside. They are not only the magnet in the urban residential area, but also link between city center and suburban farmland. Nowadays, however, with the rapid development of the city, Shanghai’s urban centers are becoming increasingly dense. The city needs more land for construction, and the urban boundaries are constantly extended outside. As a result, the suburban farmland that provides food for the city center degenerates, making the transportation distance from the farmland to markets in the city center longer. Moreover, markets in the center of Shanghai city, on one hand, are shrinking because of the urban usable land decrease, on the other hand, the improvement of peopel’s well-being increase their requirement for the shopping environment. More people like to purchase daily food in the modern supermarket instead of dirty and messy traditional food market. Old market in the centre of the city was demolished, facing the danger of decline. However,the traditional market is an important public space in the community. Morover,they are the records of local history and culture and space evolution.In this project, the designer explore the relationship between urban food selling and production space through a hybrid of traditional market, agriculture and metropolitan traffic system in the complex temporary city background. It is in order to strengthen the market space and farmland. in the metropolitan area, and serve the urban residents better
SubjectsMarkets -- China -- Shanghai, Aliments -- Approvisionnement -- China -- Shanghai, Sustainable urban development -- China -- Shanghai, Mercats -- Xina -- Xangai, Aliments -- Abastament -- Xina -- Xangai, Desenvolupament urbà sostenible -- Xina -- Xangai
Location
1: Qiu Jiang Lu, Jingan Qu, Shanghai Shi, Xina
URIhttp://hdl.handle.net/2117/327520
Collections
Share: