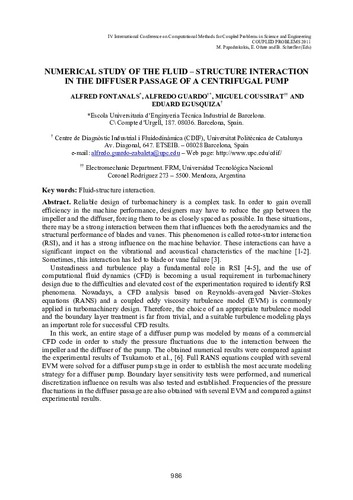 Document typeConference report
PublisherCIMNE
Rights accessOpen Access
All rights reserved. This work is protected by the corresponding intellectual and industrial property rights. Without prejudice to any existing legal exemptions, reproduction, distribution, public communication or transformation of this work are prohibited without permission of the copyright holder
Abstract
Reliable design of turbomachinery is a complex task. In order to gain overall efficiency in the machine performance, designers may have to reduce the gap between the impeller and the diffuser, forcing them to be as closely spaced as possible. In these situations, there may be a strong interaction between them that influences both the aerodynamics and the structural performance of blades and vanes. This phenomenon is called rotor-stator interaction (RSI), and it has a strong influence on the machine behavior. These interactions can have a significant impact on the vibrational and acoustical characteristics of the machine [1-2]. Sometimes, this interaction has led to blade or vane failure [3]. Unsteadiness and turbulence play a fundamental role in RSI [4-5], and the use of computational fluid dynamics (CFD) is becoming a usual requirement in turbomachinery design due to the difficulties and elevated cost of the experimentation required to identify RSI phenomena. Nowadays, a CFD analysis based on Reynolds–averaged Navier–Stokes equations (RANS) and a coupled eddy viscosity turbulence model (EVM) is commonly applied in turbomachinery design. Therefore, the choice of an appropriate turbulence model and the boundary layer treatment is far from trivial, and a suitable turbulence modeling plays an important role for successful CFD results. In this work, an entire stage of a diffuser pump was modeled by means of a commercial CFD code in order to study the pressure fluctuations due to the interaction between the impeller and the diffuser of the pump. The obtained numerical results were compared against the experimental results of Tsukamoto et al., [6]. Full RANS equations coupled with several EVM were solved for a diffuser pump stage in order to establish the most accurate modeling strategy for a diffuser pump. Boundary layer sensitivity tests were performed, and numerical discretization influence on results was also tested and established. Frequencies of the pressure fluctuations in the diffuser passage are also obtained with several EVM and compared against experimental results.
CitationFontanals García, A. [et al.]. Numerical study of the fluid – structure interaction in the diffuser passage of a centrifugal pump. A: COUPLED IV. "COUPLED IV : proceedings of the IV International Conference on Computational Methods for Coupled Problems in Science and Engineering". CIMNE, 2011, p. 986-995. ISBN 978-84-89925-78-6.
URIhttp://hdl.handle.net/2117/327505
ISBN978-84-89925-78-6
Collections
Share: