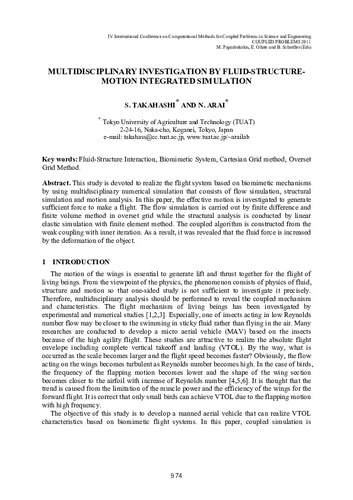 Show full item record
Takahashi, S.
Arai, N.
Document typeConference report
PublisherCIMNE
Rights accessOpen Access
Abstract
This study is devoted to realize the flight system based on biomimetic mechanisms by using multidisciplinary numerical simulation that consists of flow simulation, structural simulation and motion analysis. In this paper, the effective motion is investigated to generate sufficient force to make a flight. The flow simulation is carried out by finite difference and finite volume method in overset grid while the structural analysis is conducted by linear elastic simulation with finite element method. The coupled algorithm is constructed from the weak coupling with inner iteration. As a result, it was revealed that the fluid force is increased by the deformation of the object.
CitationTakahashi, S.; Arai, N. Multidisciplinary investigation by fluid-structure-motion integrated simulation. A: COUPLED IV. "COUPLED IV : proceedings of the IV International Conference on Computational Methods for Coupled Problems in Science and Engineering". CIMNE, 2011, p. 974-985. ISBN 978-84-89925-78-6.
URIhttp://hdl.handle.net/2117/327499
ISBN978-84-89925-78-6
Collections
Share: