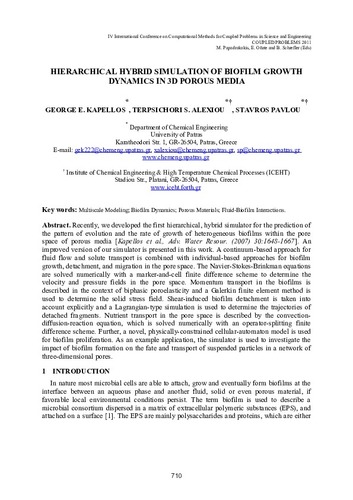 Show full item record
Kapellos, George E.
Alexiou, Terpsichori S.
Pavlou, Stavros
Document typeConference report
PublisherCIMNE
Rights accessOpen Access
Abstract
Recently, we developed the first hierarchical, hybrid simulator for the prediction of the pattern of evolution and the rate of growth of heterogeneous biofilms within the pore space of porous media [Kapellos et al., Adv. Water Resour. (2007) 30:1648-1667]. A n improved version of our simulator is presented in this work. A continuum-based approach for fluid flow and solute transport is combined with individual-based approaches for biofilm growth, detachment, and migration in the pore space. The Navier-Stokes-Brinkman equations are solved numerically with a marker-and-cell finite difference scheme to determine the velocity and pressure fields in the pore space. Momentum transport in the biofilms is described in the context of biphasic poroelasticity and a Galerkin finite element method is used to determine the solid stress field. Shear-induced biofilm detachment is taken into account explicitly and a Lagrangian-type simulation is used to determine the trajectories of detached fragments. Nutrient transport in the pore space is described by the convectiondiffusion- reaction equation, which is solved numerically with an operator-splitting finite difference scheme. Further, a novel, physically-constrained cellular-automaton model is used for biofilm proliferation. As an example application, the simulator is used to investigate the impact of biofilm formation on the fate and transport of suspended particles in a network of three-dimensional pores.
CitationKapellos, G.E.; Alexiou, T.S.; Pavlou, S. Hierarchical hybrid simulation of biofilm growth dynamics in 3D porous media. A: COUPLED IV. "COUPLED IV : proceedings of the IV International Conference on Computational Methods for Coupled Problems in Science and Engineering". CIMNE, 2011, p. 710-720. ISBN 978-84-89925-78-6.
URIhttp://hdl.handle.net/2117/327378
ISBN978-84-89925-78-6
Collections
Share: