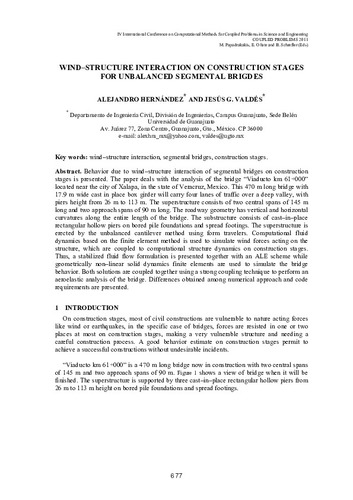 Show full item record
Hernández, Alejandro
Valdés, Jesús G.
Document typeConference report
PublisherCIMNE
Rights accessOpen Access
Abstract
Behavior due to wind–structure interaction of segmental bridges on construction stages is presented. The paper deals with the analysis of the bridge “Viaducto km 61+000” located near the city of Xalapa, in the state of Veracruz, Mexico. This 470 m long bridge with 17.9 m wide cast in place box girder will carry four lanes of traffic over a deep valley, with piers height from 26 m to 113 m. The superstructure consists of two central spans of 145 m long and two approach spans of 90 m long. The roadway geometry has vertical and horizontal curvatures along the entire length of the bridge. The substructure consists of cast–in–place rectangular hollow piers on bored pile foundations and spread footings. The superstructure is erected by the unbalanced cantilever method using form travelers. Computational fluid dynamics based on the finite element method is used to simulate wind forces acting on the structure, which are coupled to computational structure dynamics on construction stages. Thus, a stabilized fluid flow formulation is presented together with an ALE scheme while geometrically non–linear solid dynamics finite elements are used to simulate the bridge behavior. Both solutions are coupled together using a strong coupling technique to perform an aeroelastic analysis of the bridge. Differences obtained among numerical approach and code requirements are presented.
CitationHernández, A.; Valdés, J.G. Wind–structure interaction on construction stages for unbalanced segmental brigdes. A: COUPLED IV. "COUPLED IV : proceedings of the IV International Conference on Computational Methods for Coupled Problems in Science and Engineering". CIMNE, 2011, p. 677-685. ISBN 978-84-89925-78-6.
URIhttp://hdl.handle.net/2117/327374
ISBN978-84-89925-78-6
Collections
Share: