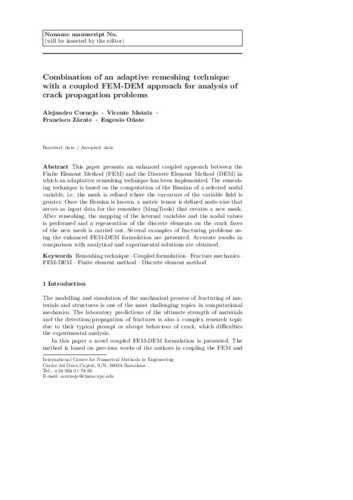 Document typeArticle
PublisherSpringer
Rights accessOpen Access
Abstract
This paper presents an enhanced coupled approach between the finite element method (FEM) and the discrete element method (DEM) in which an adaptive remeshing technique has been implemented. The remeshing technique is based on the computation of the Hessian of a selected nodal variable, i.e. the mesh is refined where the curvature of the variable field is greater. Once the Hessian is known, a metric tensor is defined node-wise that serves as input data for the remesher (MmgTools) that creates a new mesh. After remeshing, the mapping of the internal variables and the nodal values is performed and a regeneration of the discrete elements on the crack faces of the new mesh is carried out. Several examples of fracturing problems using the enhanced FEM–DEM formulation are presented. Accurate results in comparison with analytical and experimental solutions are obtained.
Description
The final publication is available at Springer via http://dx.doi.org/10.1007/s40571-019-00306-4
CitationCornejo, A. [et al.]. Combination of an adaptive remeshing technique with a coupled FEM–DEM approach for analysis of crack propagation problems. "Computational particle mechanics", Juliol 2020, vol. 7, núm. 4, p. 735-752.
URIhttp://hdl.handle.net/2117/327338
DOI10.1007/s40571-019-00306-4
ISSN2196-4378
Publisher versionhttps://link.springer.com/article/10.1007/s40571-019-00306-4
Other identifiershttps://www.researchgate.net/publication/338449379_Combination_of_an_adaptive_remeshing_technique_with_a_coupled_FEM-DEM_approach_for_analysis_of_crack_propagation_problems
Collections
Share: