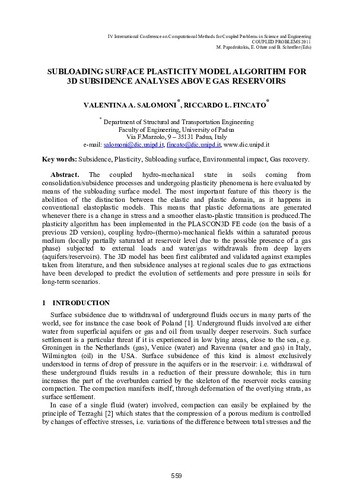 Show full item record
Salomoni, Valentina A.
Fincato, Riccardo L.
Document typeConference report
PublisherCIMNE
Rights accessOpen Access
Abstract
The coupled hydro-mechanical state in soils coming from consolidation/subsidence processes and undergoing plasticity phenomena is here evaluated by means of the subloading surface model. The most important feature of this theory is the abolition of the distinction between the elastic and plastic domain, as it happens in conventional elastoplastic models. This means that plastic deformations are generated whenever there is a change in stress and a smoother elasto-plastic transition is produced.The plasticity algorithm has been implemented in the PLASCON3D FE code (on the basis of a previous 2D version), coupling hydro-(thermo)-mechanical fields within a saturated porous medium (locally partially saturated at reservoir level due to the possible presence of a gas phase) subjected to external loads and water/gas withdrawals from deep layers (aquifers/reservoirs). The 3D model has been first calibrated and validated against examples taken from literature, and then subsidence analyses at regional scales due to gas extractions have been developed to predict the evolution of settlements and pore pressure in soils for long-term scenarios.
CitationSalomoni, V.A.; Fincato, R.L. Subloading surface plasticity model algorithm for 3D subsidence analyses above gas reservoirs. A: COUPLED IV. "COUPLED IV : proceedings of the IV International Conference on Computational Methods for Coupled Problems in Science and Engineering". CIMNE, 2011, p. 559-569. ISBN 978-84-89925-78-6.
URIhttp://hdl.handle.net/2117/327329
ISBN978-84-89925-78-6
Collections
Share: