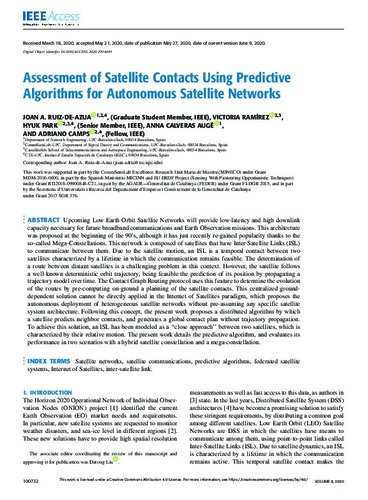 Document typeArticle
PublisherInstitute of Electrical and Electronics Engineers (IEEE)
Rights accessOpen Access
Abstract
Upcoming Low Earth Orbit Satellite Networks will provide low-latency and high downlink capacity necessary for future broadband communications and Earth Observation missions. This architecture was proposed at the beginning of the 90’s, although it has just recently re-gained popularity thanks to the so-called Mega-Constellations. This network is composed of satellites that have Inter-Satellite Links (ISL) to communicate between them. Due to the satellite motion, an ISL is a temporal contact between two satellites characterized by a lifetime in which the communication remains feasible. The determination of a route between distant satellites is a challenging problem in this context. However, the satellite follows a well-known deterministic orbit trajectory, being feasible the prediction of its position by propagating a trajectory model over time. The Contact Graph Routing protocol uses this feature to determine the evolution of the routes by pre-computing on-ground a planning of the satellite contacts. This centralized ground-dependent solution cannot be directly applied in the Internet of Satellites paradigm, which proposes the autonomous deployment of heterogeneous satellite networks without pre-assuming any specific satellite system architecture. Following this concept, the present work proposes a distributed algorithm by which a satellite predicts neighbor contacts, and generates a global contact plan without trajectory propagation. To achieve this solution, an ISL has been modeled as a “close approach” between two satellites, which is characterized by their relative motion. The present work details the predictive algorithm, and evaluates its performance in two scenarios with a hybrid satellite constellation and a mega-constellation.
CitationRuiz-de-Azua, J.A. [et al.]. Assessment of satellite contacts using predictive algorithms for autonomous satellite networks. "IEEE access", 28 Maig 2020, vol. 8, p. 100732-100748.
URIhttp://hdl.handle.net/2117/327246
DOI10.1109/ACCESS.2020.2998049
ISSN2169-3536
Publisher versionhttps://ieeexplore.ieee.org/document/9102312
Collections
Share: