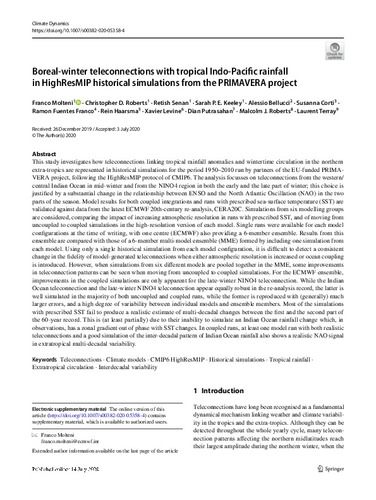 Putrasahan, Dian
Roberts, Malcolm J.
Terray, Laurent
Document typeArticle
PublisherSpringer Link
Rights accessOpen Access
European Commission's projectPRIMAVERA - PRocess-based climate sIMulation: AdVances in high resolution modelling and European climate Risk Assessment (EC-H2020-641727)
Abstract
This study investigates how teleconnections linking tropical rainfall anomalies and wintertime circulation in the northern extra-tropics are represented in historical simulations for the period 1950–2010 run by partners of the EU-funded PRIMAVERA project, following the HighResMIP protocol of CMIP6. The analysis focusses on teleconnections from the western/central Indian Ocean in mid-winter and from the NINO4 region in both the early and the late part of winter; this choice is justified by a substantial change in the relationship between ENSO and the North Atlantic Oscillation (NAO) in the two parts of the season. Model results for both coupled integrations and runs with prescribed sea-surface temperature (SST) are validated against data from the latest ECMWF 20th-century re-analysis, CERA20C. Simulations from six modelling groups are considered, comparing the impact of increasing atmospheric resolution in runs with prescribed SST, and of moving from uncoupled to coupled simulations in the high-resolution version of each model. Single runs were available for each model configurations at the time of writing, with one centre (ECMWF) also providing a 6-member ensemble. Results from this ensemble are compared with those of a 6-member multi-model ensemble (MME) formed by including one simulation from each model. Using only a single historical simulation from each model configuration, it is difficult to detect a consistent change in the fidelity of model-generated teleconnections when either atmospheric resolution is increased or ocean coupling is introduced. However, when simulations from six different models are pooled together in the MME, some improvements in teleconnection patterns can be seen when moving from uncoupled to coupled simulations. For the ECMWF ensemble, improvements in the coupled simulations are only apparent for the late-winter NINO4 teleconnection. While the Indian Ocean teleconnection and the late-winter NINO4 teleconnection appear equally robust in the re-analysis record, the latter is well simulated in the majority of both uncoupled and coupled runs, while the former is reproduced with (generally) much larger errors, and a high degree of variability between individual models and ensemble members. Most of the simulations with prescribed SST fail to produce a realistic estimate of multi-decadal changes between the first and the second part of the 60-year record. This is (at least partially) due to their inability to simulate an Indian Ocean rainfall change which, in observations, has a zonal gradient out of phase with SST changes. In coupled runs, at least one model run with both realistic teleconnections and a good simulation of the inter-decadal pattern of Indian Ocean rainfall also shows a realistic NAO signal in extratropical multi-decadal variability.
CitationMolteni, F. [et al.]. Boreal‑winter teleconnections with tropical Indo‑Pacifc rainfall in HighResMIP historical simulations from the PRIMAVERA project. "Climate Dynamics", 2020,
URIhttp://hdl.handle.net/2117/327211
DOI10.1007/s00382-020-05358-4
ISSN1432-0894
Publisher versionhttps://link.springer.com/article/10.1007/s00382-020-05358-4
Collections
Share: