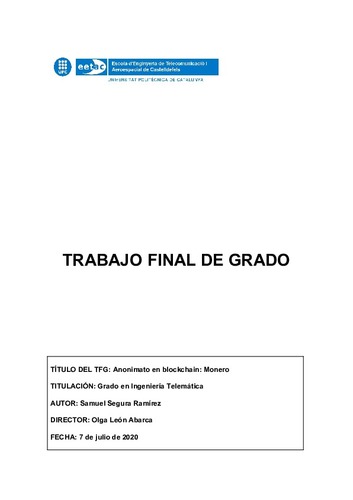 Document typeBachelor thesis
Rights accessOpen Access
Abstract
Blockchain is a decentralized database that records blocks of information and links one block to the previous ones by means of cryptographic functions. In this way, information integrity is guaranteed. So far, the main application of blockchains have been monetary transactions, and usually each blockchain uses its own currency. The first and best-known of these currencies, better known as cryptocurrencies, was Bitcoin. One of the advantages of using Bitcoin against traditional monetary systems is that it does not require the presence of a central entity, such a bank, in charge of verifying data and validating transactions. In a blockchain, its own users are responsible for that and make use of a consensus protocol to approve or reject transactions. Despite it, this cryptocurrency exhibits many problems such as the lack of anonymity in the transactions. For this reason, the scientific community has developed other approaches in order to overcome Bitcoin limitations. Monero is a blockchain created in 2014, which uses advanced cryptography in order to provide a high degree of anonymity to its users. Its main goal is to prevent third parties from linking a transaction with its sender and its receiver. With this purpose, it makes use of several security mechanisms such as ring signature, the division of the expense and two pairs of public-private keys or RingCT, a feature that allows you to hide the amount of money sent in transactions. A recent study analyzed the likelihood of cancelling anonymity provided by the ring signature. As a consequence, a new feature named RingCT was added to Monero, which allows the hiding of the amount of cryptocurrency sent in a specific transaction. The goals of this work are twofold. On the one hand, to analyze the performance of Monero in a theoretical and practical way, by running a test blockchain. On the other hand, we aim at analyzing by means of Machine Learning algorithms under which circumstances an attacker can overcome security mechanisms such as RingCT and break Monero&#8217;s anonymity.
SubjectsBlockchains (Databases), Machine learning, Cadena de blocs (Bases de dades), Aprenentatge automàtic
URIhttp://hdl.handle.net/2117/327128
Collections
Share: