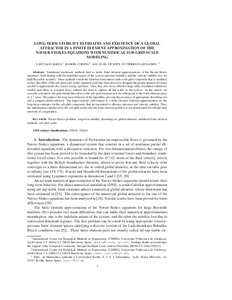 Variational multiscale methods lead to stable finite element approximations of the Navier-Stokes equations, both dealing with the indefinite nature of the system pressure stability) and the velocity stability loss for high Reynolds numbers. These methods enrich the Galerkin formulation with a sub-grid component that is modeled. In fact, the effect of the sub-grid scale on the captured scales has been proved to dissipate the proper amount of energy needed to approximate the correct energy spectrum. Thus, they also act as effective large-eddy simulation turbulence models and allow to compute flows without the need to capture all the scales in the system. In this article, we consider a dynamic sub-grid model that enforces the sub-grid component to be orthogonal to the finite element spacein L2 sense. We analyze the long-term behavior of the algorithm, proving the existence of appropriate absorbing setsand a compact global attractor. The improvements with respect to a finite element Galerkin approximation are thelong-term estimates for the sub-grid component, that are translated to effective pressure and velocity stability. Thus,the stabilization introduced by the sub-grid model into the finite element problem is not deteriorated for infinite time intervals of computation.
URIhttp://hdl.handle.net/2117/3033