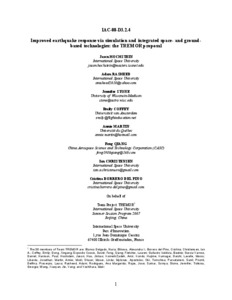 Document typeWorking paper
Rights accessOpen Access
Abstract
Earthquakes occurring around the world each year cause thousands of deaths, millions of dollars in damage to infrastructure, and incalculable human suffering. In recent years, satellite technology has been a significant boon to response efforts following an earthquake and its after-effects by providing mobile communications between response teams and remote sensing of damaged areas to disaster management organizations. In 2007, an international team of students and professionals assembled during the International Space University’s Summer Session Program in Beijing, China to examine how satellite and ground-based technology could be better integrated to provide an optimised response in the event of an earthquake. The resulting Technology Resources for Earthquake MOnitoring and Response (TREMOR) proposal describes an integrative prototype response system that will implement mobile satellite communication hubs providing telephone and data links between response teams, onsite telemedicine consultation for emergency first-responders, and satellite navigation systems that will locate and track emergency vehicles and guide search-and-rescue crews. A prototype earthquake simulation system is also proposed, integrating historical data, earthquake precursor data, and local geomatics and infrastructure information to predict the damage that could occur in the event of an earthquake. The backbone of these proposals is a comprehensive education and training program to help individuals, communities and governments prepare in advance. The TREMOR team recommends the coordination of these efforts through a centralised, non-governmental organization.
URIhttp://hdl.handle.net/2117/2881
Collections
Share: