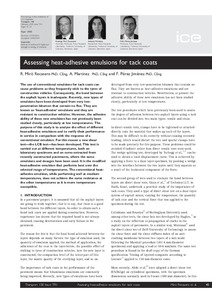 The use of conventional emulsions for tack coats can cause problems as they frequently stick to the tyres of construction vehicles. Consequently, the bond between the asphalt layers is inadequate. Recently, new types of emulsions have been developed from very lowpenetration bitumen that contain no flux. They are known as ‘heat-adhesive’ emulsions and they are resistant to construction vehicles. However, the adhesive ability of these new emulsions has not previously been studied closely, particularly at low temperatures. The purpose of this study is to analyse the effect of different heat-adhesive emulsions and to verify their performance in service in comparison with the response of a conventional emulsion. For this reason a new shear test—the LCB test—has been developed. This test is carried out at different temperatures, both on laboratory specimens and on cores extracted from recently constructed pavements, where the same emulsions and dosages have been used. It is the modified heat-adhesive emulsion that performs best over the selected range of temperatures. The conventional heatadhesive emulsion, while performing well at medium temperatures, does not achieve the same resistance at the other temperatures as it is more temperature susceptible.
CitationMiró, R.; Martínez, A.; Pérez, F. Assessing heat-adhesive emulsions for tack coats. Proceedings of the Institution of Civil Engineers : Transport, 2005, vol. 158, no. 1, p. 45.
URIhttp://hdl.handle.net/2117/2869
DOI10.1680/tran.2005.158.1.45
Publisher versionhttp://www.icevirtuallibrary.com/doi/10.1680/tran.2005.158.1.45