Building a deep isolating wall by an existing rail tunnel 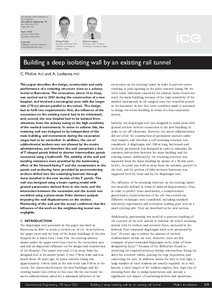 Document typeArticle
PublisherInstitution of Civil Engineers
Rights accessOpen Access
Abstract
This paper describes the design, construction and early performance of a retaining structure close to a subway tunnel in Barcelona. The excavation, about 16 m deep, was carried out in 2001 during the construction of a new hospital, and involved a rectangular area with the longer side (170 m) almost parallel to the tunnel. The design had to fulfil two requirements: first, the influence of the excavation on the existing tunnel had to be minimised; and, second, the new hospital had to be isolated from vibrations from the subway owing to the high sensitivity of the medical instruments. In order to achieve this, the retaining wall was designed to be independent of the main building, and movements during the excavation stages had to be controlled. In addition, the use of subhorizontal anchors was not allowed by the metro administration, and therefore the wall comprised a line of T-shaped panels linked to shorter intermediate panels excavated using a hydromill. The stability of the wall and bending resistance were provided by the buttressing effect of the forward-facing T and the compression in the panels and anchoring force provided by post-tensioning anchors drilled into the underlying bedrock through ducts installed in the rear section of the T panels. The wall was designed using a beam–spring model with ground parameters derived from in situ tests, and the interaction between the excavation and the tunnel was modelled using a plane-strain finite element analysis imposing the wall displacements on the section. Monitoring of the wall and the tunnel confirmed that the influence of the work on the neighbouring tunnel was negligible.
CitationMolins, C.; Ledesma, A. Building a deep isolating wall by an existing rail tunnel. Proceedings of the Institution of Civil Engineers Geotechnical Engineering, 2006, vol. 159, july, no. 3, p. 219.
URIhttp://hdl.handle.net/2117/2868
DOI10.1680/geng.2006.159.3.219
Publisher versionhttp://www.icevirtuallibrary.com/doi/full/10.1680/geng.2006.159.3.219
Collections
Share: