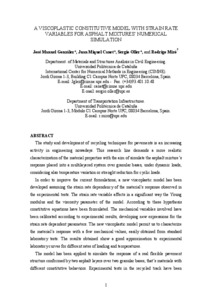 The study and development of recycling techniques for pavements is an increasing activity in engineering nowadays. This research line demands a more realistic characterization of the material properties with the aim of simulate the asphalt mixture’s response placed into a multilayered system over granular bases, under dynamic loads, considering also temperature variation or strenght reduction for cyclic loads. In order to improve the current formulations, a new viscoplastic model has been developed assuming the strain rate dependency of the material’s response observed in the experimental tests. The strain rate variable affects in a significant way the Young modulus and the viscosity parameter of the model. According to these hypothesis constitutive equations have been formulated. The mechanical variables involved have been calibrated according to experimental results, developing new expressions for the strain rate dependent parameters. The new viscoplastic model permit us to characterize the material’s response with a few mechanical values, easily obtained from standard laboratory tests. The results obtained show a good approximation to experimental laboratory curves for different rates of loading and temperatures. The model has been applied to simulate the response of a real flexible pavement structure conformed by two asphalt layers over two granular bases, that’s materials with different constitutive behaviors. Experimental tests in the recycled track have been made obtaining the horizontal strain evolution under dynamic load. Different loading rates and temperatures, as well as cracked and continuum pavement responses have been considered in the study. Strains were measured in the interface between the two asphalt layers and simulated using the here proposed model offering a fairly good approximation of the real response observed in the track, although the degree of variation even in the experimental curves is quite high. The results of this study represent a proper base for further developments in structural analysis of pavement layers, considering more complex phenomena, determinant in the long term material’s response, to develop a numerical tool for pavements’ design and lifetime prediction.
CitationGonzalez, J.M.; Canet, J.M.; Oller, S.; Miro, R. A Viscoplastic constitutive model with strain rate variables for asphalt mixtures’ numerical simulation. Computational Materials Science, 2007, vol. 38, no. 4, p. 543.
URIhttp://hdl.handle.net/2117/2857
ISSN0927-0256
Publisher versionhttp://www.elsevier.com/wps/find/journaldescription.cws_home/523412/description