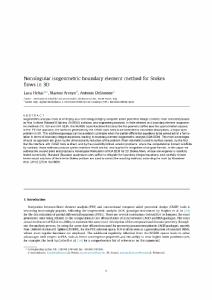 DeSimone, Antonio
Document typeArticle
Rights accessOpen Access
European Commission's projectPREDMODSIM - Predictive models and simulations in nano- and biomolecular mechanics: a multiscale approach (EC-FP7-240487)
Abstract
Isogeometric analysis (IGA) is emerging as a technology bridging computer aided geometric design (CAGD), most commonly based on Non-Uniform Rational B-Splines (NURBS) surfaces, and engineering analysis. In finite element and boundary element isogeometric methods (FE-IGA and IGA-BEM), the NURBS basis functions that describe the geometry define also the approximation spaces. In the FE-IGA approach, the surfaces generated by the CAGD tools need to be extended to volumetric descriptions, a major open problem in 3D. This additional passage can be avoided in principle when the partial differential equations to be solved admit a formulation in terms of boundary integral equations, leading to boundary element isogeometric analysis (IGA-BEM). The main advantages of such an approach are given by the dimensionality reduction of the problem (from volumetric-based to surface-based), by the fact that the interface with CAGD tools is direct, and by the possibility to treat exterior problems, where the computational domain is infinite. By contrast, these methods produce system matrices which are full, and require the integration of singular kernels. In this paper we address the second point and propose a nonsingular formulation of IGA-BEM for 3D Stokes flows, whose convergence is carefully tested numerically. Standard Gaussian quadrature rules suffice to integrate the boundary integral equations, and carefully chosen known exact solutions of the interior Stokes problem are used to correct the resulting matrices, extending the work by Klaseboer et al. (2012) [27] to IGA-BEM.
CitationHeltai, L.; Arroyo, M.; DeSimone, A. Nonsingular isogeometric boundary element method for stokes flows in 3D. "Computer methods in applied mechanics and engineering", Gener 2014, vol. 268, p. 514-539.
URIhttp://hdl.handle.net/2117/28558
DOI10.1016/j.cma.2013.09.017
ISSN0045-7825
Publisher versionhttp://dx.doi.org/10.1016/j.cma.2013.09.017
Collections
Share: