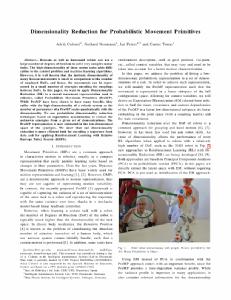 Document typeConference report
PublisherInstitute of Electrical and Electronics Engineers (IEEE)
Rights accessOpen Access
Abstract
Humans as well as humanoid robots can use a large number of degrees of freedom to solve very complex motor tasks. The high-dimensionality of these motor tasks adds difficulties to the control problem and machine learning algorithms. However, it is well known that the intrinsic dimensionality of many human movements is small in comparison to the number of employed DoFs, and hence, the movements can be represented by a small number of synergies encoding the couplings between DoFs. In this paper, we want to apply Dimensionality Reduction (DR) to a recent movement representation used in robotics, called Probabilistic Movement Primitives (ProMP). While ProMP have been shown to have many benefits, they suffer with the high-dimensionality of a robotic system as the number of parameters of a ProMP scales quadratically with the dimensionality. We use probablistic dimensionality reduction techniques based on expectation maximization to extract the unknown synergies from a given set of demonstrations. The ProMP representation is now estimated in the low-dimensional space of the synergies. We show that our dimensionality reduction is more efficient both for encoding a trajectory from data and for applying Reinforcement Learning with Relative Entropy Policy Search (REPS).
CitationColomé, A. [et al.]. Dimensionality reduction for probabilistic movement primitives. A: IEEE-RAS International Conference on Humanoid Robots. "Humanoid Robots (Humanoids), 2014 14th IEEE-RAS International Conference on". Madrid: Institute of Electrical and Electronics Engineers (IEEE), 2014, p. 794-800.
URIhttp://hdl.handle.net/2117/28553
DOI10.1109/HUMANOIDS.2014.7041454
Publisher versionhttp://ieeexplore.ieee.org/stamp/stamp.jsp?tp=&arnumber=7041454
Collections
Share: