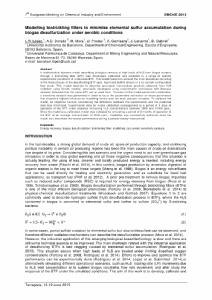 Lafuente Sancho, Francisco Javier
Gabriel Buguña, David
Document typeConference report
Rights accessOpen Access
Abstract
A mathematical dynamic model describing biological removal of high loads of H2S from biogas streams through a biotrickling filter (BTF) was developed, calibrated and validated to a range of specific experimental conditions of a lab-scale BTF. This model takes into account the main processes occurring in the three phases of the desulfurizing BTF (gas, liquid and biofilm phase) in a co-current configuration flow mode. This model attempts to describe accurately intermediate products obtained from H2S oxidation using kinetic models, previously developed using respirometric techniques with biomass samples obtained from the same BTF set up used here. Previous to the model parameters calibration, a sensitivity analysis was performed in order to focus the parameters estimation on those parameters that showed a highest influence on modelling results over the main process variables. To calibrate the model, an objective function considering the difference between the experimental and the predicted data was minimized. Experimental data for model calibration corresponded to a period of 5 days of operation of the BTF under stepwise increasing H2S concentrations between 2000 and 10000 ppmv. Once the model was calibrated, model was validated by simulating a period of 2 months of operation of the BTF at an average concentration of 2000 ppmv. Validation was successfully achieved since the model also described the reactor performance during a pseudo steady-state period.
CitationLópez, L. [et al.]. Modelling biotrickling filters to minimize elemental sulfur accumulation during biogas desulfurization under aerobic conditions. A: European Meeting on Chemical Industry and Environment. "EMChIE 2015 Conference Proceedings". Tarragona: 2015, p. 325-330.
URIhttp://hdl.handle.net/2117/28542
ISBN978-84-8424-367-0
Collections
Share: