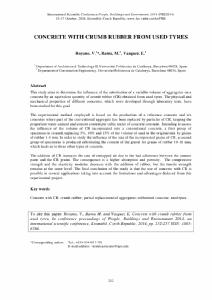 Document typeConference report
Rights accessOpen Access
Abstract
This study aims to determine the influence of the substitution of a variable volume of aggregates on a concrete by an equivalent quantity of crumb rubber (CR) obtained from used tyres. The physical and mechanical properties of different concretes, which were developed through laboratory tests, have been studied for this goal. The experimental method employed is based on the production of a reference concrete and six concretes where part of the conventional aggregate has been replaced by particles of CR, keeping the proportion water-cement and cement content per cubic meter of concrete constant. Intending to assess the influence of the volume of CR incorporated into a conventional concrete, a first group of specimens is created, replacing 5%, 10% and 15% of the volume of sand in the original mix by grains of rubber 1-4 mm. In order to study the influence of the size of the incorporated grains of CR, a second group of specimens is produced substituting the content of the gravel for grains of rubber 10-16 mm, which leads us to three other types of concrete. The addition of CR increases the rate of entrapped air due to the bad adherence between the cement paste and the CR grains. The consequence is a higher absorption and porosity. The compressive strength and the elasticity modulus decrease with the addition of rubber, but the tensile strength remains at the same level. The final conclusion of the study is that the use of concrete with CR is possible in several applications taking into account the limitations and advantages deduced from this experimental project.
CitationRoyano, V.; Barra, M.; Vazquez, E. Concrete with crumb rubber from used tyres. A: International Scientific Conference People, Buildings and Environment. "People, Buildings and Environment 2014 : Conference proceedings : 15-17 October, 2014, Kromeríž, Czech Republic". Kromeríž: 2014, p. 252-257.
URIhttp://hdl.handle.net/2117/28505
ISBN1805-6784
Publisher versionhttp://www.fce.vutbr.cz/ekr/PBE/Proceedings/2014/024_14183.pdf
Collections
Share: