Permutation 2-groups I: structure and splitness 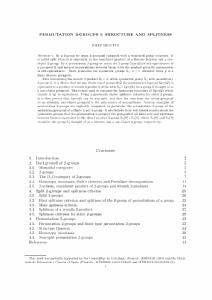 By a 2-group we mean a groupoid equipped with a weakened group structure. It is called split when it is equivalent to the semidirect product of a discrete 2-group and a one-object 2-group. By a permutation 2-group we mean the 2-group Sym(G) of self-equivalences of a groupoid G and natural isomorphisms between them, with the product given by composition of self-equivalences. These generalize the symmetric groups S-n, n >= 1, obtained when G is a finite discrete groupoid.; After introducing the wreath 2-product S-n (sic) G of the symmetric group S-n with an arbitrary 2-group G, it is shown that for any (finite type) groupoid G the permutation 2-group Sym(G) is equivalent to a product of wreath 2-products of the form S-n (sic) Sym(G) for a group G thought of as a one-object groupoid. This is next used to compute the homotopy invariants of Sym(G) which classify it up to equivalence. Using a previously shown splitness criterion for strict 2-groups, it is then proved that Sym(G) can be non-split, and that the step from the trivial groupoid to an arbitrary one-object groupoid is the only source of non-splitness. Various examples of permutation 2-groups are explicitly computed, in particular the permutation 2-group of the underlying groupoid of a (finite type) 2-group. It also follows from well known results about the symmetric groups that the permutation 2-group of the groupoid of all finite sets and bijections between them is equivalent to the direct product 2-group Z(2)[1] x Z(2)[0] where Z(2)[0] and Z(2)[1] stand for the group Z(2) thought of as a discrete and a one-object 2-group, respectively. (C) 2014 Elsevier Inc. All rights reserved.
CitationElgueta, J. Permutation 2-groups I: structure and splitness. "Advances in mathematics", 20 Juny 2014, vol. 258, p. 286-350.
URIhttp://hdl.handle.net/2117/28484
DOI10.1016/j.aim.2014.03.011
ISSN0001-8708
Publisher versionhttp://www.sciencedirect.com/science/article/pii/S0001870814001054