Conditions of consistency for multicomponent stellar systems. II. Is a point-axial symmetric model suitable for the Galaxy? 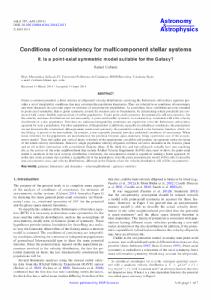 Except where otherwise noted, content on this work is licensed under a Creative Commons license : Attribution-NonCommercial-NoDerivs 3.0 Spain
Abstract
Under a common potential, a finite mixture of ellipsoidal velocity distributions satisfying the Boltzmann collisionless equation provides a set of integrability conditions that may constrain the population kinematics. They are referred to as conditions of consistency and were discussed in a previous paper on mixtures of axisymmetric populations. As a corollary, these conditions are now extended to point-axial symmetry, that is, point symmetry around the rotation axis or bisymmetry, by determining which potentials are connected with a more flexible superposition of stellar populations. Under point-axial symmetry, the potential is still axisymmetric, but the velocity and mass distributions are not necessarily. A point-axial stellar system is, in a natural way, consistent with a flat velocity distribution of a disc population. Therefore, no additional integrability conditions are required to solve the Boltzmann collisionless equation for such a population. For other populations, if the potential is additively separable in cylindrical coordinates, the populations are not kinematically constrained, although under point-axial symmetry, the potential is reduced to the harmonic function, which, for the Galaxy, is proven to be non-realistic. In contrast, a non-separable potential provides additional conditions of consistency. When mean velocities for the populations are unconstrained, the potential becomes quasi-stationary, being a particular case of the axisymmetric model. Then, the radial and vertical mean velocities of the populations can differ and produce an apparent vertex deviation of the whole velocity distribution. However, single population velocity ellipsoids still have no vertex deviation in the Galactic plane and no tilt in their intersection with a meridional Galactic plane. If the thick disc and halo ellipsoids actually have non-vanishing tilt, as the surveys of the solar neighbourhood that include RAdial Velocity Experiment (RAVE) data seem to show, the point-axial model is unable to fit the local velocity distribution. Conversely, the axisymmetric model is capable of making a better approach. If, in the end, more accurate data confirm a negligible tilt of the populations, then the point-axisymmetric model will be able to describe non-axisymmetric mass and velocity distributions, although in the Galactic plane the velocity distribution will still be axisymmetric.
CitationCubarsi, R. Conditions of consistency for multicomponent stellar systems. II. Is a point-axial symmetric model suitable for the Galaxy?. "Astronomy and astrophysics", 27 Maig 2014, vol. 567, p. 1-7.
URIhttp://hdl.handle.net/2117/28482
DOI10.1051/0004-6361/201423813
ISSN0004-6361
Publisher versionhttps://docs.google.com/viewer?url=http://www.aanda.org/articles/aa/pdf/forth/aa23813-14.pdf
Collections
Share: