Conditions of consistency for multicomponent axisymmetric stellar systems. Is an axisymmetric model suitable yet? 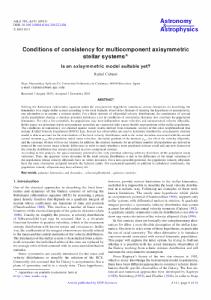 Solving the Boltzmann collisionless equatio n under the axisymmetric hypot hesis introduces serious lim itations on describing the kinematics of a single stellar system according to the local Galactic observables. Instead of relaxing the hypothesis of axisymmetry, one alternative is to assume a mixture model. For a finite mixture of ellipsoidal velocity distributions, the coexistence of several stellar populations sharing a co mmon potential introduces a set of conditions of consistency that m ay also constrain the population kinematics. For only a few potentials, the populations may have independent mean veloc ities and unconstrained velocity ellipsoids. In this paper, we determine which axisymmetric potentials are connect ed with a more flexible superposition of the stellar populations. The conditions of consistency are checked against recent results derived from kinematic surveys of the solar neighbourhood that include RAdial Velocity Experiment (RAVE) data. Several key observables are used to determine whether the axisymmetric mixture model is able to account for the main features of the local velocity distribution, such as the vertex deviation associated with the second central moment µ ¿ , the population radial mean velocities, the radial gradient of the moment µ z , the tilt of the velocity ellipsoids, and the existence of stars with no net rotation. In addition, the mixture moments for an arbitrary number of populations are derived in terms of the one-to-one mean velocity di ff erences in order to study whether a more populated mixture could add any new features to the velocity distribution that remain unnoticed in a two-component mixture. According to this analysis, the quasi-stationary potential is the only potential allowing arbitrary directions of the population mean velocities. Then, the apparent vertex deviation of the total velocity distribution is due to the di ff erence of the mean velocities of the populations whose velocity ellipsoids hav e no vertex deviation. For a non-separable pot ential, the population v elocity ellipsoids have the same orientation and point towards the Galactic centre. For a potential separable in addition in cylindrical coordinates, the population velocity ellipsoids may ha ve arbitrary tilt.
CitationCubarsi, R. Conditions of consistency for multicomponent axisymmetric stellar systems. Is an axisymmetric model suitable yet?. "Astronomy and astrophysics", 17 Desembre 2013, vol. 561, p. 1-16.
URIhttp://hdl.handle.net/2117/28464
DOI10.1051/0004-6361/201322436
ISSN0004-6361
Publisher versionhttp://www.aanda.org/articles/aa/pdf/forth/aa22436-13.pdf