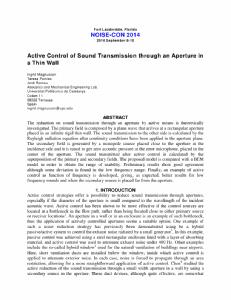 The reduction on sound transmission through an aperture by active means is theoretically investigated. The primary field is composed by a plane wave that arrives at a rectangular aperture placed in an infinite rigid thin wall. The sound transmission to the other side is calculated by the Rayleigh radiation equation after continuity conditions have been applied in the aperture plane. The secondary field is generated by a monopole source placed close to the aperture in the incidence side and it is tuned to get zero acoustic pressure at the error microphone, placed in the center of the aperture. The sound transmitted after active control is calculated by the superposition of the primary and secondary fields. The proposed model is compared with a BEM model in order to obtain the range of usability. Preliminary results show good agreement although some deviation is found in the low frequency range. Finally, an example of active control as function of frequency is developed, giving, as expected, better results for low frequency sounds and when the secondary source is placed far from the aperture.
CitationMagnusson, I.; Pàmies, T.; Romeu, J. Active control of sound transmission through an aperture in a thin wall. A: National Conference on Noise Control Engineering. "Noise-con 14 : proceedings : 2014 National Conference on noise control engineering : advancing the technology and practice of noise control engineering". Fort Lauderdale-Florida: 2014, p. 1-8.
URIhttp://hdl.handle.net/2117/28433