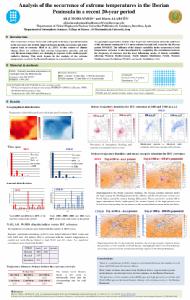 Except where otherwise noted, content on this work is licensed under a Creative Commons license : Attribution-NonCommercial-NoDerivs 3.0 Spain
Abstract
The occurrence of heat waves and cold spells is having a special attention in the last years due to their impact in human health, ecosystems and other aspects such as economy. This work focuses in the analysis of the extreme temperature events in the Iberian Peninsula for the period 1994-2013. To this end, we used the 12-hourly maximum and minimum temperatures at 2m height from the ERA-interim reanalysis database (ECMWF), with a 1ºx1º horizontal resolution in a 10 x10 grid points domain covering the region. The hot (cold) extremes were defined as the maximum (minimum) temperatures above (below) the 99.9 th (0.1 th) percentile of the whole dataset. High temporal variability was obtained, with years in which the frequency of extremes was high (2003 and 2012 for hot events, 2005 and 2012 for cold events) and others in which it was low (1997 and 2002 for hot events, 1998 and 2002 for cold events). August was the month with maximum frequency of hot extremes, while January and February were for the cold ones. The influence of the climate variability in the occurrence of temperature extremes was also analyzed. Thereby, the Spearman and Kendall correlations between the frequency of extremes and the most influencing modes of climate variability affecting Western Mediterranean, the North Atlantic Oscillation (NAO), the Western Mediterranean Oscillation (WeMO) and the Arctic Oscillation (AO), were computed. These correlations were all negative for cold extremes (only significant with NAO and AO) showing that the wetter and less insolated conditions associated to the negative mode of the climatic indices in eastern Iberian Peninsula favors the occurrence of cold extreme episodes. Atmospheric back-trajectories starting on the date of the extremes were computed using the Hybrid Single-Particle Lagrangian Integrated Trajectory model (HYSPLIT-4) of the National Oceanic and Atmospheric Administration (NOAA), in order to draw up the concentration fields corresponding to the provenance regions of the air-masses responsible of the extreme episodes.
CitationMohammed, A.; Alarcon, M. Analysis of the occurence of extreme temperatures in the Iberian Peninsula in a recent 20-year period. A: International Conference on Meteorology and Climatology of the Mediterranean. "5th International Conference on Meteorology and Climatology of the Mediterranean". Istanbul: 2015, p. 34.
URIhttp://hdl.handle.net/2117/28338
Publisher versionhttp://www.tethys.cat/MetMed/5Istanbul/index_en.htm
Collections
Share: