Symbolic dynamics to discriminate healthy and ischaemic dilated cardiomyopathy populations: An application to the variability of heart period and QT interval 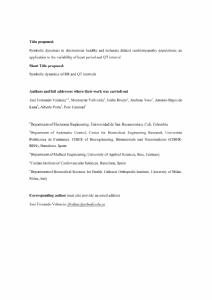 Myocardial ischaemia is hypothesized to stimulate the cardiac sympathetic excitatory afferents and, therefore, the spontaneous changes of heart period (approximated as the RR interval), and the QT interval in ischaemic dilated cardiomyopathy (IDC) patients might reflect this sympathetic activation. Symbolic analysis is a nonlinear and powerful tool for the extraction and classification of patterns in time-series analysis, which implies a transformation of the original series into symbols and the construction of patterns with the symbols. The aim of this work was to investigate whether symbolic transformations of RR and QT cardiac series can provide a better separation between IDC patients and healthy control (HC) subjects compared with traditional linear measures. The variability of these cardiac series was studied during daytime and night-time periods and also during the complete 24 h recording over windows of short data sequences of approximately 5 min. The IDC group was characterized by an increase in the occurrence rate of patterns without variations (0V%) and a reduction in the occurrence rate of patterns with one variation (1 V%) and two variations (2V%). Concerning the RR variability during the daytime, the highest number of patterns had 0V%, whereas the rates of 1V% and 2V% were lower. During the night, 1V% and 2V% increased at the expense of diminishing 0V%. Patterns with and without variations between consecutive symbols were able to increase the separation between the IDC and HC groups, allowing accuracies higher than 80%. With regard to entropy measures, an increase in RR regularity was associated with cardiac disease described by accuracy > 70% in the RR series and by accuracy > 60% in the QTc series. These results could be associated with an increase in the sympathetic tone in IDC patients.
CitationValencia, J. [et al.]. Symbolic dynamics to discriminate healthy and ischaemic dilated cardiomyopathy populations: An application to the variability of heart period and QT interval. "Philosophical transactions of the Royal Society A. Mathematical physical and engineering sciences", 13 Febrer 2015, vol. 373, núm. 2034, p. 20140092-1-20140092-20.
URIhttp://hdl.handle.net/2117/28337
DOI10.1098/rsta.2014.0092
ISSN1364-503X