Analysis of extreme rainfall in the Ebre Observatory (Spain) 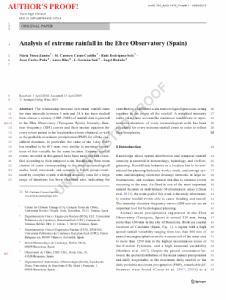 Peña, Juan Carlos
Rius, Anna
Solé, J. Germán
Redaño Xipell, Angel
Document typeArticle
Rights accessOpen Access
All rights reserved. This work is protected by the corresponding intellectual and industrial property rights. Without prejudice to any existing legal exemptions, reproduction, distribution, public communication or transformation of this work are prohibited without permission of the copyright holder
Abstract
Relationship between maximum rainfall rates for time intervals between 5 minutes and 24 hours has been studied from almost a century (1905-2003) of rainfall data registered in the Ebre Observatory (Tarragona, Spain). Intensity-duration-frequency (IDF) curves and its master equation for every return period in the location have been obtained, as well as the probable maximum precipitation (PMP) for all the considered durations. In particular, the value of the 1-day PMP has resulted 415 mm, very similar to previous estimations of this variable for the same location. Extreme rainfall events recorded in this period have been analyzed and classified according to their temporal scale. Besides the three main classes of cases corresponding to the main meteorological scales, local, mesoscale and synoptic, a fourth group constituted by complex events with high intense rates for a large range of durations has been identified also, indicating the contribution of different scale meteorological processes acting together in the origin of the rainfall. A weighted intensity index taking into account the maximum rainfall rate in representative durations of every meteorological scale has been calculated for every extreme rainfall event in order to reflect their complexity.
Description
The final publication is available at Springer via http://dx.doi.org/10.1007/s00704-015-1476-0
Location
1: 43520 Observatori de l'Ebre, Tarragona, Espanya
CitationPérez, N. [et al.]. Analysis of extreme rainfall in the Ebre Observatory (Spain). "Theoretical and applied climatology", 25 Abril 2015.
URIhttp://hdl.handle.net/2117/28325
DOI10.1007/s00704-015-1476-0
ISSN0177-798X
Publisher versionhttp://link.springer.com/article/10.1007%2Fs00704-015-1476-0
Collections
Share: